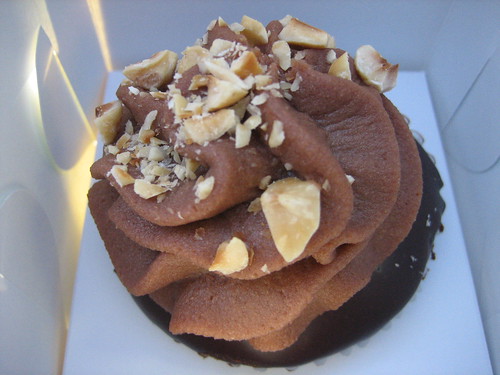 While strolling to Zankou Chicken for lunch, I was cutting through the alley when I noticed a sign behind Winchell’s Donuts for Dainties Cupcakes. Despite the fact that the entrance didn’t look like a store front at all, let alone one that sells cute cupcakes, but rather a sketchy office entrance, I was drawn to it. “Chocolate covered cupcakes” the sign beckoned.

When I walked in, for a second I felt like I stumbled in someone’s office space as a woman sat at her desk which was located right in front of the refrigerated cupcake case. She looked up at me and my friend expectantly as we surveyed the operation anxiously. Guys in chef outfits behind the counter mixed big bowls of chocolate powder. “Can I help you?” the woman asked us. “We’re just looking,” I shrugged, my eyes transfixed by the rows and rows of cupcakes with colorful toppings.

Apparently they were all made out of devil’s food cake covered with chocolate ganache but each had different whipped cream flavors for the topping and inside. My eyes locked on the Nutella, with its chocolate brown topping and nut sprinkles. I’ve never had a Nutella cupcake before. As soon as the woman boxed it in a cute single cupcake Dainties box, I asked if it was OK if I got one more cupcake. “Of course!” she said. I know, stupid question. I also wanted to see if they had a two-cupcake box, but no such luck.

So I went for the Vanilla Bean cupcake anyway, which was one of the plainer-looking cakes with only a white topping and no garnish of any kind. I thought it would be a nice contrast to the rich Nutella.

After the woman boxed up the second one I asked her about her little operation here. Dainties is actually an offshoot of a catering company, Flatbush and J Gourmet Co., and has only been in business for about two months. Apparently their cupcakes were so popular during events they catered that it would have been silly not to sell them to the public.

What makes them different from other cupcakes is that the flavor variety isn’t in the cake (which is always devil’s food) but solely in the whipped cream (which means these cakes need to be refrigerated). Flavors range from Blood Orange to Caramel to Irish Cream to Meyer Lemon to Tiramisu and so on, as well as the standard faves like chocolate and vanilla bean. Five flavors are featured every day so if you’re heading over, you might want to give them a call first to see what’s available.

In an informal taste test I conducted with my partner in cupcake crime, dotsara, we agreed that the vanilla bean was better than the too-rich Nutella. In fact, the vanilla was a nice complement to the devil’s food and evoked childhood memories of bday cake and ice cream. The Nutella with the cake, on the other hand, was overkill.

However, even though they satisfied my sweet tooth, Dainties hasn’t quite impressed me. I like more variety in my cupcakes than just the different frosting flavors. Despite the fact that the store is a couple of blocks from my place, I think I’d still prefer jumping in the car for a trek to Susie Cakes or Sprinkles…unless I’m absolutely dying for a quick cupcake fix, that is.