Breakfast at the Firehouse: The More Things Change, the More They Suck 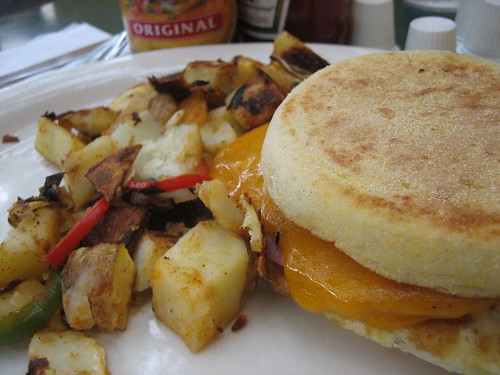 When I lived near Venice, the Firehouse on Rose and Main used to be one of my favorite breakfast joints. Great service, great coffee, great breakfast sandwiches and great big glasses of iced beverages that were perfect for thirsty Muscle Beach bodybuilders. But I haven’t gone there in maybe a year or so.

Yesterday though, since I was nursing a horrible horrible hangover, I knew a big breakfast would be just the thing. So my party bus companion Erin and I met up at the Firehouse to recount the previous night’s festivities. I should have known things at the ol’ Firehouse were different from what I was used to when a haggard, unshaven Robert Downey Jr. followed me in from off the street. ‘Cept I didn’t see him behind me so let the screen door slam shut when I walked in. Oops.

Lots of people were waiting for a table next to a “Wait to be seated” sign. I asked the group of people before me if there was a list. They gestured to the counter where there was a bunch of waiters buzzing around. I stood there looking around, waiting for someone to give me direction. Um… Put my name on a list? Wait outside?

A waiter walked up to the two high-maintenance-looking girls standing nearby. “Is your name on the list?” he asked the one girl who was still wearing her big Dior sunglasses inside. “Serena…it’s on there.” The other waiter asked him where he wanted to seat them. “I don’t know…in the good-looking people section?” he laughed and looked at the girls who ignored him. I rolled my eyes. FINALLY one of the waiters asked me, “What do you need?” “I need to put my name on the list.” “Here you go,” he said, shoving the clipboard at me. So I scrawled it down for him. Sheesh.

But when Mr. Downey Jr. stepped up, suddenly the hostess appeared and answered him when he asked how long the wait was. She wrote his name down for him. When Robert left saying he’d wait outside, I heard a waiter say to the hostess, “He comes in a lot.”

At this point, Erin still hadn’t shown up but the hostess was ready to seat me outside where no one wanted to sit since it looked like it was going to sprinkle at any minute now. She tried to seat me under the tree but I asked if I could sit along the wall instead cuz I didn’t want any leaves falling in my coffee like they did last time I sat there.

Since I was hungover, my tolerance threshold was very low. I felt claustrophobic pressing myself up against the wall to get away from that guy’s ass and his pungent cologne. The waitress wouldn’t refill our coffees with them standing there since there wasn’t any space to get around them. So when she was in the vicinity I asked her if we could move to another table. The bodybuilder girlfriend knew we felt uncomfortable as she glanced over at us when I said that but stayed rooted in her spot, tossing her long black hair with her bejeweled hand. Ugh!

So Erin and I picked up our coffees and creamers and moved to the adjacent wall. Aaah, much better. As we sat waiting for our food to arrive. Waiters kept grabbing the condiments off our table as they brought other people their food. WTF? That seems rude, I mean, we might need those. We mused that the waiters were probably mad at us for switching tables on them.

When the food finally arrived, I was a tiny bit disappointed by the presentation. I know I only ordered a breakfast sandwich but it looked so small on the platter. There were some dry-looking country potatoes next to it but they didn’t even bother to pile on enough to cover up the white spaces on the plate to make it look full. If you can’t do that why not use a smaller plate? Oh, and the huge glasses for beverages? They were now replaced by average-size plastic ones. Lame. What happened here?

In my whole visit, they failed to impress me. I used to be in awe of their attentive service, their ample coffee and iced beverages, and their delectable breakfasts. Now? They suck.

At least Erin liked her small portion of spinach pancakes. My sandwich was good but since I didn’t touch the potatoes I was still kinda hungry. So we strolled down to Urth Caffe on the other end of Main Street for its coconut royale cake. Yum!

I would write off the Firehouse as a PINSMFIA but I think I’ll give it one more chance for sentimental reasons.