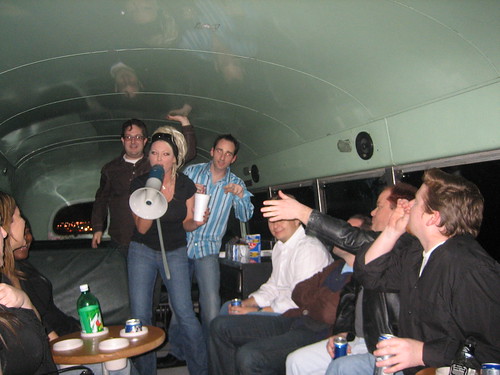 Ugh, my head hurts. I haven’t had a hangover like this since…I don’t know when. What’s funny is that before I got on board L.A. Barhopper’s Mystery Bus Tour, I swore to myself and my friends that I wasn’t going to get plastered. Usually two drinks is my max, for practical reasons. But I guess I just got carried away with the spirit of the bus.

Nope, before the night was over I would have unwittingly consumed three Jameson & Cokes, three swigs from a flask of Jack Daniels, a Black and Tan and a bottle of Newcastle. Yup. Don’t know what happened there.

The evening started off innocent enough. We showed up at Joxer Daly’s in Culver City. Brian, the party bus tour director, told us we could order anything off the menu for free. Sweet! and a good idea to pad the stomach to prepare it for the night’s festivities. My group of friends and crackhead readers made fast friends with the other would-be passengers as we all sat together and shared our orders of fries, quesadillas, and chicken fingers.

Brian took this time to have us sign a waiver basically saying we’d be responsible for ourselves. So it was up to us to have a designated driver and/or cut ourselves off before we got back in our cars at the end of the night. Fortunately, I went with my friend Erin who said she’d be my designated driver.

At 9 we all boarded the bus. First stop was a liquor store since no one BYOB’d, which you’re allowed to on the bus. I wasn’t a big drinker in college but for some reason I felt like we were a bunch of college kids, even though we were all in our 30s, as we swarmed a corner liquor store and stocked up on flasks of hard liquor and beer. I got a flask of Jack and some Newcastle to split with my friends.

Back on the bus, Brian via a megaphone told us the rules of the bus. The only one I remembered was “No throwing up out the bus windows.” Fair enough. 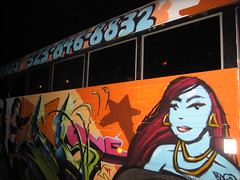 A busty blonde with crazy big hair named George was the bus cheerleader (for lack of a better word), trying to get us to play drinking games while shouting instructions through a megaphone. Unfortunately, no one was all that drunk yet and we couldn’t really understand what she was asking us to do so we just laughed nervously and waited for our next stop.

George provided a lot of entertainment for us, trying to get us to dance, performing lap dances for everyone, getting in a minor skirmish and being, um, verrrry friendly in general. Turns out she used to be wrestler Randy Savage’s girlfriend and was known in WCW circles as Gorgeous George. Now she’s married to a member of the Misfits. Interesting girl, that George.

The bars we hit that night were the Mint, Casey’s and the Mountain Bar. We were supposed to do Bar 107 instead of the Mountain Bar but were unable to get in since “they didn’t know it was going to be that crowded.” What? On a Saturday night? They didn’t plan on being busy? So I was disappointed by that, especially since I’ve been wanting to check out Bar 107 for awhile now.

Casey’s was the deadest venue of the night. An Irish bar downtown, our group of 16 basically took over the joint. I asked Brian how he picks the bars the bus goes to and basically they’re sponsors of L.A. Barhopper’s magazine. I suggested that he do a tour with just wine bars since there are a lot of those now. You know, start the night at San Antonio Winery and have people pack picnics. How fun would that be? But I don’t know if that inspired him. 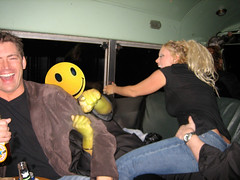 When we got back on the bus after the Mountain Bar, I passed out and wasn’t feeling well at all. But apparently here are some of the things I missed (as told to me by my friends there that night): The bus driver got us lost for an hour, the bus stopped so someone could take a public bathroom break, two drunk girls made out in the back of the bus, a drunken shouting match with harsh words ensued between some passengers, George yelled at people through the megaphone some more, and someone yacked out the bus window. Yeah, I missed quite a bit.

Would I do this again? I would with a bunch of friends. It just sounds like a better option with a big group, that way you and your 10 friends don’t have to worry about parking, DUIs and paying for covers. Now, if Brian did a wine bar tour, I’d be all over that.