The Frolic Room: When You Just Want a Cheap Drink and a Bar Stool in Hollywood 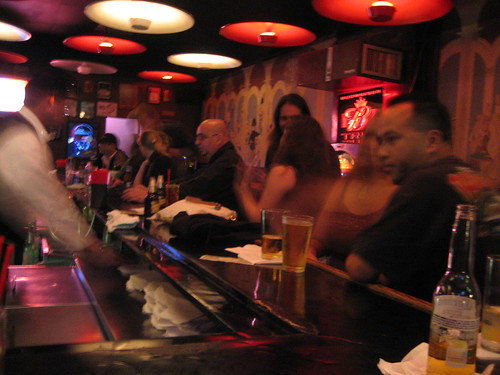 On Saturday when Lillian, Valerie and I left the Create:Fixate party, we were actually looking for a livelier venue since at 9pm, the art party was still kinda dead. We ended up walking from Social Hollywood (too snobby) to Citizen Smith (closed for a private party) to Tiny’s KO (closed for a Varla magazine party) before we settled in the Frolic Room.

At first I was afraid it might be packed. You never can tell since it’s right next door to the Pantages, whether theater crowds might be clogging the place up. Fortunately, they weren’t and we were able to walk right up to the fabulously friendly and talented bartender and order a drink toute de suite. All three of us ordered Absolut Vanilla with ginger ale (real ginger ale, mind you, and not 7UP with Coke). At $5.50 a pop for a tall glass of not-well liquor, it seemed quite a bargain in contrast to the other bars in Hollywood.

A bow-tied bouncer shoos crowds inside to a limited number of seats and stools, where the old-fashioned popcorn machine provides free salty treats. Wash it down with a cheap beer or cocktail, pick a few songs on the jukebox and make new friends. Much like Boardner’s and the Burgundy Room, this bar is an old-school Hollywood holdout. 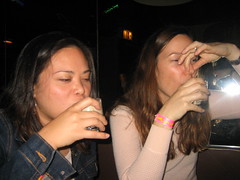 Val, Lillian and I considered leaving for the Royale or Bar 107 but then realized we already got a good thing here. We had street parking, bar stools, a jukebox playing Prince songs and $5 cocktails, what more could we ask for? So we stayed and ordered a round of oatmeal cookie shots ($6.50, made up of Goldschlagger, Baileys and Butterscotch schnapps) which the girls were skeptical of at first but ended up loving. We had to order two of those.

Soon a couple of drunk guys walked up to us and chatted with us for the rest of the night, providing us with more entertainment (and free drinks) for the evening.

So the Frolic Room saved our girls’ night in Hollywood. Just when we thought we’d have to resign ourselves to $8 drinks at the art party, where there was nowhere to sit and the music was too loud to hold a conversation. If Tiny’s KO is closed for some weird reason or you want to grab a cheap drink before the theater, consider a frolic at this Hollywood legend.