Create:Fixate: How Hollywood Does an Art Show 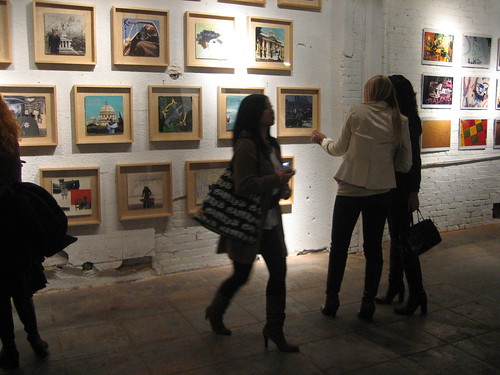 Last night my friend Valerie invited me to one of those Create:Fixate parties, where a collection of artists come together to show their works in a Hollywood warehouse in the midst of djs, dancing ravers, live music and booze. It wasn’t the first time I got such an invite but since I’m not very arty I usually bowed out. Valerie’s friend, David K. Hauver, was one of the featured artists so she wanted to show him some love.

And, with nothing to do except some vague plans to check out downtown bars, I decided to check out Create:Fixate’s “Love. Beauty. Desire.” show. Sure, there was a $15 cover but it was all in support of the arts, right? My friend Lillian and I got there earlyish at 8 to meet up with Val. “Do you have a boyfriend?” the doorman asked Lillian as he wrapped a pink paper band around her wrist, while my doorman heard that and said to me, “I’m not going to ask you any personal questions. Just have a good time.” 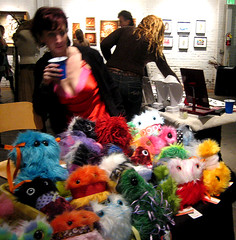 Since it was considerably early, the large, stark warehouse was still sorta empty, which was nice cuz we could still admire the art on the wall without people getting in the way. A dj playing thumping house music kept the atmosphere festive. I couldn’t help but notice that everyone here looked so…cool and interesting. A great place to people watch. A black man in a silk red shirt was the only one dancing, swaying to his own rhythm in front of a wall of art while the roomful of show-goers acted like this wasn’t unusual at all. A girl with a red Louise Brooks bob and a mod black-and-white mini dress paused before a table of stuffed animal purses (?). A 7-year-old blonde girl in a long sleeveless dress with pink tulle fringe and a necklace of gold coins ran up to the bartender asking for a drink of water after her 15-minute solo rave to the music.

When Lillian and I finally found Valerie we decided to check out the drink situation. The huge bar was in the middle of the first room and was tended by unsmiling, but pretty, boys. But with $7 well drinks, we decided to just have the one drink here and leave the party for some barhopping since we were within walking distance of the Cahuenga Corridor.

After a single walkaround the huge art space, pausing only to watch the live musical act and an artist giving tarot card readings, we decided to leave to continue our drinking elsewhere.

We did, however, return later in the evening after getting soused from cheaper drinks elsewhere (more on that in another post). Since it was now 1am, the scene was more vibrant and electric as the warehouse was packed with even more arty folk and the music seemed louder, too. Lillian and I went to the second room where the dj was now spinning tunes before a crowd of gyrating ravers. We joined in and danced nonstop as the music was too good to sit through. A couple of nice guys eventually joined us. This was definitely a great way to cap off our evening in Hollywood.