Royale on Wilshire: Not on the QT for Long 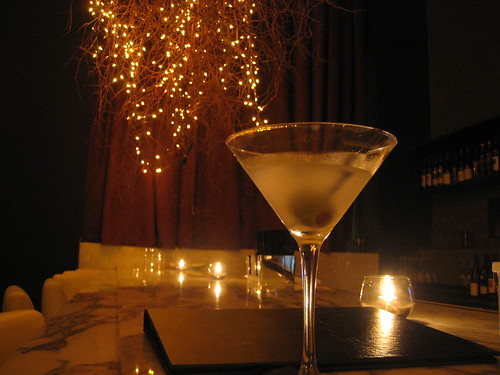 I know I’m going to be sorry later for sharing this apparently secret place with you but it’s too good to keep to myself. My new favorite bar is the Royale. I went there last night with my friend John for the first time after reading about it online since its opening last month. I’ve heard so many good things about it that I knew I had to see and experience it for myself.

When we walked into the first bar area, empty with its dark wood and high ceilings, I chatted for a bit with the bartender and asked for their specialty cocktail list which she said they hadn’t printed yet since the “place was still so new.” But she showed me her own menu of 10 or so cocktails (ranging in price from $9-$11) which listed the recipes for each drink. At first, I felt like I was being given keys to the city.

Unfortunately there wasn’t anything too impressive on their menu. Just stuff like “their popular” key lime pie cocktail and some chocolate raspberry concoction. My friend

Kylee, a wonderful bartender at Katsuya, had told me that they specialized in old-fashioned cocktails, but none were to be found on the list. A shame since Sidecars and Singapore Slings would go perfectly in this luxe 1920s setting.

Before I could make myself comfortable, John whisked me away to the bar located in the restaurant area across the outdoor courtyard. And I was glad he did cuz it was gorgeous. It had a more elegant vibe than the front bar. Where that one seemed more for hipsters who liked to swill cosmos while lounging on low white couches and listening to the dj spin, this restaurant bar with its long slab of Italian marble and twinkly lights entwined in a nest of branches overhead was perfect for those who prefer sipping vodka martinis or partaking of the Royale’s extensive wine list. 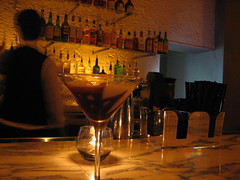 And on this night it was virtually empty, so we had the bartender, Tyler, all to ourselves. John ordered up a vodka martini ($11) while I decided to give their chocolate martini a chance. It’s not something that was on the specialty cocktail menu but Tyler was glad to make it for me. Except when I spied a bottle of Van Gogh Espresso Vodka I had to have something with that. So Tyler fixed up a drink with that, a chocolate cordial and a splash of cream. The result was a potent and rich concoction. He said that when he first served that to a guest, they disdained it for being too strong so he had to dumb it down with more milk making it taste like a chocolate shake. Sissy.

John and I then decided to try an order of their calamari. And once we cracked open that menu, I had many questions for Tyler.

Me: “Why are their three exclamation points behind ‘Crispy Pork Spareribs’?”

Him: “They want to convey that’s all they are. Nothing else, just crispy pork spareribs.”

Me: “What’s up with the ‘Huge Bowl of Cotton Candy’ and what color is the candy?”

Him: “It’s for that kid in you and it’s a fun thing to order with a bunch of friends. It’s blue.”

Me: “Why is the burger called ‘The Original Royale Burger’ and not ‘Royale with Cheese’?”

Him: “I don’t know, but that hasn’t stopped people from ordering it like that.”

John: “Will you stop badgering the man already?”

Me: “Why doesn’t the specialty cocktail menu have old-fashioned cocktails instead?”

Him: “It doesn’t yet but it’ll probably move in that direction and we can make those now if a customer orders one.”

Later, much to John’s chagrin, Tyler offered to give us a tour of the Royale. He took us to the front bar, upstairs to the VIP section which contained a back room with an antler chandelier, framed mirrors on the wall, couches and a plasma TV, a perfect place for a private party to watch some game or possibly a favorite TV show ::cough::24::cough::. The room located across from this one was where there was an open pool table. You don’t have to pay to play either. Everything was out, the balls sat ready on the table.

Downstairs Tyler took us past the 30-person booth, a round table with seats low enough and spaced far enough from the table to allow those sitting in the middle of the booth to scoot past all others. Imagine reserving this for parties! Amazingly you don’t have to put down a deposit or pay for bottle service for any of the tables or rooms (including that fab upstairs VIP lounge)! Just get there early before the bar gets busy. Or you can call ahead and just reserve it. 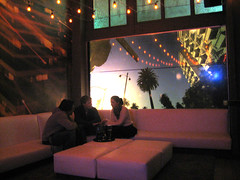 And if you wanted even more options for seating areas to hang out with your friends there’s always the Westlake Lounge located up a ramp to the right of the bar. Back there you have your pick of the long white couches or the tall bar stools and tables. I love how instead of a big view of the sketchy area of Wilshire Boulevard that the Royale sits on, you’ve got this big photo mural to look at.

Back in the restaurant we finished up our evening by enjoying our calamari. Soo delicious. Bite-size pieces which were lightly breaded and not greasy at all. However, the lemon garlic dipping sauce wasn’t as savory as it sounds but tasted like (and had the consistency of) mayonnaise. Still, yum though.

Tyler continued to tell us about the Royale’s happy hour which, contrary to online listings, runs from 5 to 7pm. I told him to put “a late happy hour” in the suggestion box since that’s all the rage now. Hopefully he believed me. In any case, HappyHourRemixed at the Royale features DJ Suprema and sounds swell. Too bad by the time I make it over from the Westside through rush hour traffic it will have already ended.

Man, I loved this bar and hope to come back again soon. It just sucks that it’s located so far off the beaten path…but maybe that’s a good thing, too.