Fancy a Shag? How Thick Is Your Wallet? 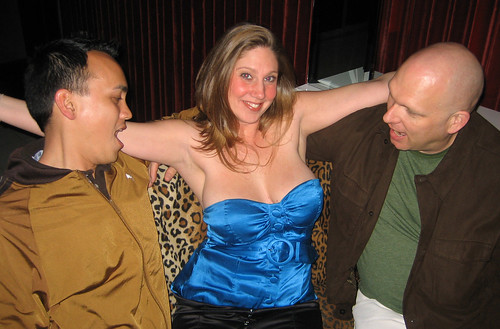 After my careful research of possible venues for Dre’s birthday, we ended up going with something completely different. My friend Hawaiian Ryan hooked us up with a patio at Shag, a nightclub in Hollywood. The catch was that we’d have to do bottle service with four bottles, which were about $300 a piece and good for an average of 20 pours a bottle. There was also $100 charge for the tables and 20% gratuity figured into our final price. Yup, pretty pricey stuff but we hoped that the party guests wouldn’t mind contributing to our cause: making this an awesome bday for Dre.

At first we had wanted the VIP section of the club, the Leopard Room (5-bottle minimum), an area of leopard-printed booths located right off the dance floor and guarded by huuuge bouncers but since Dre wanted her friends to be able to come and go as they pleased we needed the larger space. Ryan said the patio would be perfect because we’d have our own tables, our own bar and our own bartender and all “for peanuts.” Heh, h’yeah.

When we arrived at 8:30, the club was of course not open yet but we were still allowed to start our party. We had told everyone to come before 10pm to avoid standing in the long line and paying the $20 cover. Dre’s friends trickled in and made themselves at home, camping out in the Leopard Room under the huge stalactite-looking crystal chandeliers. And Jeff, Shag’s general manager, was good enough to turn on some music for us. So the dance floor was open and ready as lights danced off the half-disco ball spinning overhead. 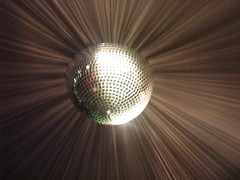 Unfortunately everyone was still too sober to attempt the dance floor.

Since we had decided to hold off on bringing out the bottles til the club opened at 10, people desperate for drink had to order their own cocktails. A tiny tumbler of vodka and OJ was $10. I heard beer was $4. Standard club prices, I guess.

At 9:45, the crowd got all whiney and restless so we opened up the patio, brought out the bottles and moved the party. At first there was some concern that since the patio was wide-open to the club without bouncers guarding the doorway that just anyone could come in and partake of our bottle service, especially since we now didn’t have our own bartender but rather a “hostess.” But Jeff said that the club never had that problem before because if people can afford the $20 cover, they can afford their own drinks. So we let the doors remain open.

However, through the course of the night, nightclubbing strangers inched their way into our room and a couple of non-friends even managed to get their hands on a bottle but were then shooed away. We asked if we could have bouncers then but the staff said that contrary to what Jeff had initially told us, we had only reserved the tables and not the whole room. Ack.

No one told us that when we were sealing the deal. Was it wrong to assume that if we were told we had our own bar and bartender and tables that that included the floor space between the tables, too?

Fortunately, Dre tends to get surly when she drinks and had no problem with walking up to strangers and telling them that they had to leave our private party. At first I felt bad that she had to play bouncer at her own party but she assured me that she was having fun doing just that.

About 50+ friends of Dre showed up to celebrate her birthday that night and I think they had fun. Many came up to me and Hawaiian Ryan to thank us for setting up the party at such a fab venue since previous party venues had included not-so-desirable locations…like Brennan’s..twice.

Here, everyone enjoyed the ’70s-shag-tastic setting with its low lights, disco decor and the fact that food could be ordered. The club crowd, however, wasn’t all too pretty to look at. Citysearch reviewers called Shag clientele on most nights “the trashiest people.” Eek! A totally different scene from what I had first encountered there months ago during the LA.com party. And that line they told us to come before 10pm to avoid? When I took a peek out front, there was no line. Just the valet guys waiting for suckas to pull up to spend $20 to park. Ryan said that he was surprised how dead a Saturday night here was. But that was OK by us as our party pretty much stuck to the patio.

In the end, it was a successful night. Dre had a memorable bday and her friends got to have a swanky night out in Hollywood. But for my birthday, I think I’ll stick to something more low-key (read: cheap).