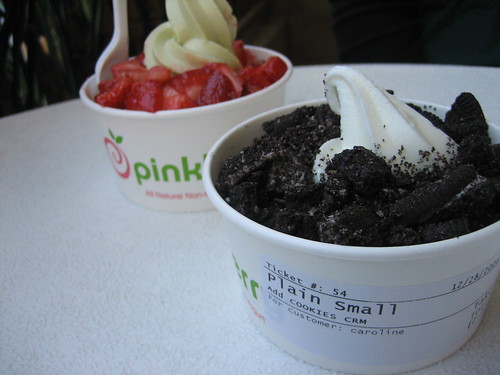 This past summer on one of those beautifully hot days (remember those? le sigh), me and my bro, a WeHo inhabitant, wanted to get a cold & tasty treat so he decided to take me to Pinkberry, a yogurt shop in his hood. But when we got there there was a long-ass line of Pinkberry faithfuls stretching out the door onto the sidewalk. On other hot days following, we tried going there again only to be met with the same impossibly long queue of yogurt addicts. And what was eerie was that none of them seem peeved to be standing in a long, slow-moving line in the hot sun. Instead they all shared that same glazed-over, expressionless look you see on cult members. Online, the Pinkberry cult is out in full effect as reviews tout this all-natural, non-fat dessert option’s real-yogurt-ness. Even then I was eh about it. It’s yogurt, what’s the big deal?

It was only when I was walking around my newish neighborhood and saw that they opened up a Pinkberry on Sawtelle where one of my fave boba cafes once stood that I decided to give it a try. The colder weather and the fact it was a bit after lunch on a weekday made my chances of a noncrowded experience good. Sure enough with no line I was able to chat with the smiley people working the counter and leisurely look over my sugar-free, fat-free, low-carb topping options. The workers were very helpful and friendly, even more so when they discovered it was my first time at Pinkberry. “Would you like a sample?” they offered. Of course, like every good pusher knows, the first taste is

With only two yogurt flavors of slightly sour Plain or not-sweet Green Tea, I’d have to depend on the toppings to really make this happen for me. When I asked what was a popular combination, the workers really didn’t know how to answer that but instead offered their own favorite choices. “Mango with kiwi and plain yogurt is really good.” “Hm, that sounds a bit tart. I want something sweet, like chocolate,” I whined. “Hmmm…” the counterperson looked blankly at the containers of toppings before her. “Fruity pebbles? Cap’n Crunch?” Although there were some quirky offerings, overall I wasn’t too impressed by the selection. But then again I’m not a health food nut and ain’t afraid of sweet.

Finally I settled on the plain yogurt with the cookies and cream topping. “That’s a popular choice,” the Pinkberry pusher offered. Meh. She tried to sell me on the medium size by saying that with two toppings it was a good deal but that just looked like it’d be too much yogurt for me so I settled on the small size which still seemed like a huge portion, especially with the cookies and cream crumbles piled on top of the tower of a swirl. 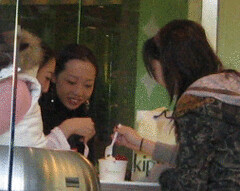 At this point a long line had mysteriously sprung up behind me with people eagerly looking over my shoulder at the selections. I skidaddled out of their way and grabbed a sidewalk table outside so I could safely, and legally, take pictures since the sign out front explicitly reads “Photography Prohibited.” Heh, I’ll show you!

Inside, the West Elm-esque paper chandeliers, pebble-stoned floor and colorful wall display of plastic containers gave this West L.A. shop a really kawaii girly feel. Which probably accounts for the fact that 99% of the clientele that day seemed to consist of young, pretty and thin Japanese girls all daintily spooning yogurt into their small mouths. So that’s their secret!

As I dug into my cookies and cream crumbly concoction I still couldn’t understand why everyone makes such a big deal about Pinkberry. There are only two yogurt flavors which, granted, aren’t overly sweet and taste like actual yogurt but still, only two flavors. Is it cuz people like its simplicity?

In any case, I’ve resigned myself to the fact that I’m more a Beard Papa girl (the creampuff place across the street on Sawtelle) than a Pinkberry groupie. Size 8, here I come!