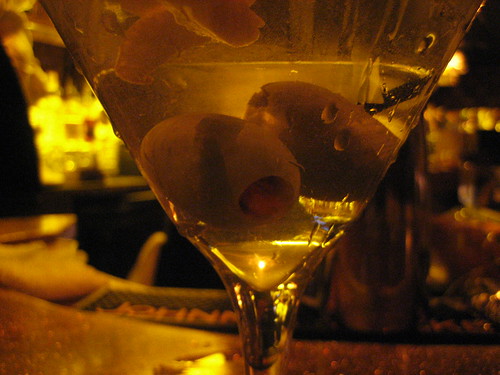 When I first sampled Saints & Sinners’ cocktail list during their launch party, I skipped over their Holy Water cocktail ($10), a lethal martini made up of both premium gin (Tanqueray) and vodka (Ketel One, I think). Back then, I was still into the sweet drinks and that just sounded unappetizing. But the other night when I revisited that cocktail list, Holy Water was the only thing that appealed to me. I think I was just in a mood for an actual martini.

The bartender raised an eyebrow and shook his head while he served it up. “My wife won’t let me drink those,” he said. “Why not?” I asked. “Because then she’d have to deal with me.” Hmm, sounds like trouble.

It looked innocent enough sitting in its martini glass with two big green olives resting at the bottom. But when I took that first sip, I knew that I’d be praying the next morning…for the throbbing hangover to go away. Now that’s a drink. After the first three sips, I felt the telltale signs of a buzz coming on. That was quick! The other night when I had drinks at the Cheesecake Factory in Brentwood, even after three mixed drinks I felt nothing. (I knowww, it was the Cheesecake Factory.) Here, this one drink did the job of four.

Of course I couldn’t consume the whole cocktail in its concentrated form so I poured some ice water in there to make it bearable. Only then could I finish it.

If you want to anesthetize a wound or warm up during these especially chilly nights, try out this unholy martini. It’ll get the job done.