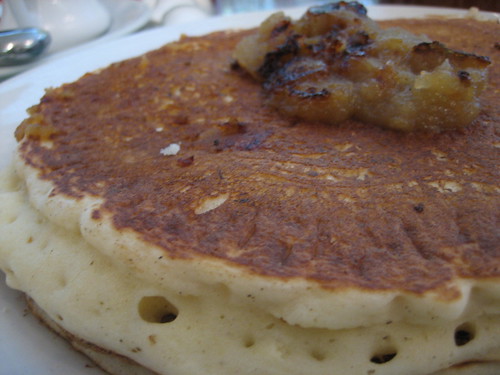 It seems like everyone loves John O’Groats except me. I don’t get it. (How do you say that name anyway?) I’ve read the online reviews about how there’s always a line outside of eager diners waiting for that tasty, cheap breakfast so I had to check it out. Plus it’s in my new hood, so having a cheap breakfast nook at the ready is always nice.

If you want a delicious breakfast and you’re willing to wait for it, a meal here might just make your weekend…. Loyal locals who do brave the crowds know what edible rewards await them.

When I went on a Saturday morning around 10, there wasn’t a line…yet. But outside there was a nice little coffee bar set up for the anticipated masses. I love that. Free coffee. Inside, the restaurant was buzzing with families, friends, couples enjoying their meals. In one room was an actual counter for those who don’t want to wait for a table or who are dining alone. I made a mental note of it for the times when I just want a place to read the paper, get a cuppa joe and eat some eggs by myself.

This day, though, I was with my out-of-town friend, Jennifer, so we got a table. It took awhile to actually get a waitress to take our order but after 10 minutes of wondering if we were invisible, she came over. 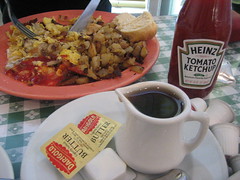 I skipped over the fancier breakfast fare like the Huevos O’Groats (“featured in L.A. Magazine‘s Top 100 Dishes”) and the special-of-the-day macadamia mango pancakes for the simple 2x2x2 ($6.95) which is two slices of bacon, two eggs and two pancakes. I know, it’s so simple how can I expect it to be tasty? But if they screw up something like that how can they do any better with something more complicated?

Apparently I got it wrong. Since everyone raves about O’Groats’ heartier gourmet dishes maybe that’s where all the effort is exerted. Because the straight breakfast sucked. The bacon was like cardboard in temperature, texture and taste. If you screw up my bacon, that just pisses me off. That’s my favorite part of the meal! The scrambled eggs were tasteless as well. I tried to save them with some salt and even Tabasco but to no avail. I wonder if they use butter at all when cooking?

For pancakes I had asked to substitute the buttermilk for the applesauce pancakes just to mix things up. It sounded yum. I imagined applesauce with a hint of cinnamon and moist, fluffy pancakes. But nope. It was inedible…well, at least to me. I could only manage two bites. The applesauce was tasteless goop dolloped on top of the stack, oh but with a hint of apple flavor. Wah. At least the coffee was good.

But would I never come back here again? Actually, I would. For the simple reasons that it’s nearby, cheap and closer than IHOP.