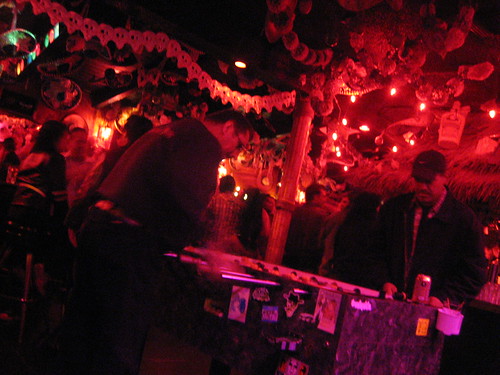 Why are all the cool bars on the Eastside? Last night was my first time in the Cha Cha Lounge, located right across the street from the Red Lion Tavern on Glendale Boulevard, and I loved it!

Judging from the outside, I didn’t know what to expect. When I think “Cha Cha” I think “Cha Cha Chicken” but for some reason I didn’t anticipate sombreros and marionettes on ceilings, rocker chicks and pretty Asian girls at the bar, cute boys galore or PBR on tap.

The scene and scenesters were awash in that flattering red light that makes everyone and everything look good. All were young and youngish dressed casual or at least their hipster interpretation of it. No attitude but that goes without saying in a Silver Lake bar, I think.

Going on a Friday night a little past midnight, there wasn’t the line outside that everyone complains about even though inside things were a little crowded. Looking around at the mixed crowd, I half-expected to see someone I knew but only had my glances returned with unfamiliar smiles.

I had knocked back a Jameson and Coke, followed soon after by Jameson neat, which was the way to go judging from online reviews of the bar that say the mixed drinks here suck. The bartenders seemed friendly enough although one bartender seemed to serve everyone except my patient friend while the bartender at the other end of the bar only needed one raised eyebrow from me to know that I required a drink.

My favorite part about this place? The photo booth! I loves me the photo booths. The first picture is always one of shock when you’re not ready, followed by general silliness. After we finished our drinks, we stumbled through the crowd to the back where the photo booth was. There were already a bunch of people standing around it, waiting for their photos to develop so we jumped in. For $2 we got a great souvenier that pretty much summed up the night.

My Eastside friend who introduced me to Cha Cha, bless him, calls it a “fabricated dive bar” and at first I disagreed. It’s much too big, there were no old bar flies passed out at the bar counter nor popcorn machines to feed the masses. But in the place of a pool table there are foosball tables and in my inebriated haze I vaguely remember a vending machine filled with Marlboro Lights, CDs, Pop Rocks and artsy tchotckes.

At one point I realized I was staring at a garage-sale classic painting of a topless cowgirl hanging near the bar for way too long. Maybe it is a dive bar in the sense that the drinks are cheap, the decor is faux dingy and it sorta has that air of a hole-in-the-wall hideaway.

I’d love to come back, if only I knew how to get here on my own.