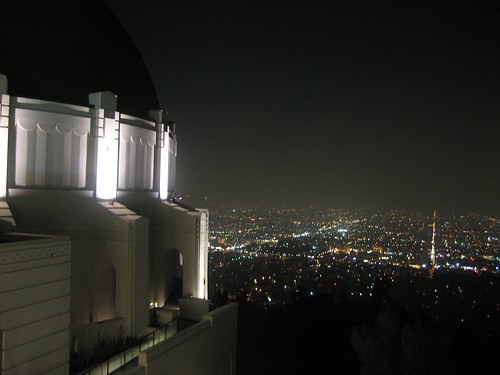 After visiting the reopened Griffith Observatory, I can’t help but wonder if I would have appreciated it more had I been eight again. Don’t get me wrong. I’ve always loved the view — of the city lights at least — and of course the architecture. But Foucault Pendulum? The Tesla Coil? And all that literature you gotta read to explain each exhibit? Meh. Although, the scales to see how much you’d weigh on the other planets are still pretty cool.

What’s new and improved about the redone L.A. landmark? A lot more exhibits and even a new downstairs area for the Gunther Depths of Space Exhibits, gift shop and Cafe at the End of the Universe.

That’s all very well and good but my friend and I were unimpressed by “The Big Picture,” what they named the wall papered in photos of the universe which you could pretend-ponder through fake telescopes set up across the room from it. It could have been a whole lot cooler. The wall was immense and filled with stars but when you looked through the fake telescope you could see the creases that separated each sheet of stars as well as the glare from the overhead lights. Suspension of disbelief? Ferget it. Didn’t they have the technology to make that better somehow? They could have gotten better lighting and perhaps projected the stars on the wall or something.

There were also exhibits of meteors from outer space that you could touch, but instead of being the actual pieces with alien texture they appeared to be polished Pottery Barn copper plates. At first, we were confused. Did someone remove the meteor pieces? But then we noticed the labels next to the copper discs that said they were actually polished pieces of meteor. Hm. What was up with that? I wonder if kids get disappointed when they realize that, like I was. Or are their imaginations so good that they are fine with the manufacturedness of it all?

What was cool, though, was catching the show ($7) in the Samuel Oschin Planetarium. At first it was a bit cheesy. The narrator stood in the center of the room holding a glowing orb talking very David Copperfield dramatic about ancient people’s perception of what went on in the skies while the audience, in newly comfortable chairs, leaned back and stared at the domed ceiling of stars, probably wishing for some Floyd and maryjane.

But the show itself was pretty interesting; learning how we as modern people came to understand our universe through the brilliance of some very forward-thinking scientists. At some moments while staring up at the fake sky in the planetarium, it almost felt like we were outside looking up at the stars. It made me want to just drive out to the desert and stargaze for real.

After the show, we ran up to the telescope on the roof to beat the crowds. There, we ascended the steps up to the big 12-inch Zeiss refracting telescope to check out some white dots in the night sky. With the haze and no celestial goings-on this night, it just wasn’t a great time to spy the sky; something I’m sure if I were eight I wouldn’t have minded.

But I forgot my minor disappointment with the much-touted renovation when I revisited what makes the Observatory so special to me: its history, beautiful architecture and breath-taking perspective of Los Angeles. It was good to see it again after all these years.