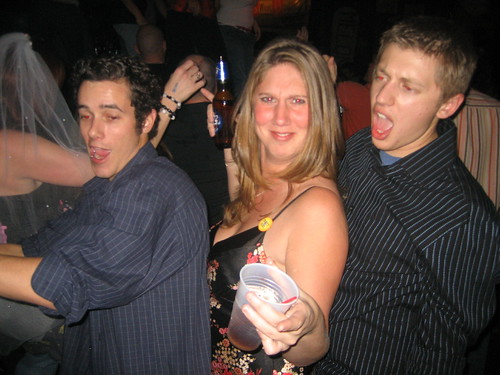 Wow, three PINSMFAs in quick succession. I’m on a bitchy roll. But this had to be said even if it is in Vegas. Coyote Ugly Saloon is only a good place to go to if you’re a single 20-something guy who just can’t get laid. Go to Coyote Ugly where there are plenty of writhing drunk girls for you to rub your junk against.

The bachelorette party from hell went here Saturday night for some dancing after dinner at Gonzalez y Gonzalez in New York New York. It was the only place anyone could think of that had a decent cover price ($10), a short line and proximity. The place was packed and the music loud. We flocked here for the dancing but it looked like the only real dancing was taking place on stage where girls were invited to take the spotlight for a free shot of whatever the MC was pouring. Little did I know that that was the only place where a girl could dance without getting freaked on by Night at the Roxbury rejects. 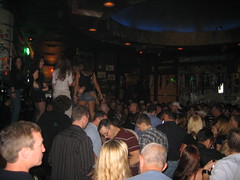 When the night was still young, dancing was still doable since people weren’t that plastered yet. But as the evening wore on, you couldn’t swing a stick without hitting a drunk guy, one who inevitably rubbed up against you uninvited. At first I let it happen. I was in Vegas after all, this is what they do here I guess. But when there were three guys freaking on me and Dre in a long freakin’ daisy chain, I had an out-of-body experience, looked at myself and just had to laugh. “What are you laughing at?” one of the guys asked. “This isn’t dancing. You’re just rubbing up against girls!” Suffice it to say, he didn’t get what was so funny.

One of the bachelorettes in our group finally got so sick of one particular dancing fool that she shoved him really hard out of the way when he kept trying to grind his butt into her pelvis. “I already warned him to leave me alone but he wouldn’t stop,” she said, exasperated. But it wasn’t just him. Everytime I just even slightly moved to the music, some random guy would just start freaking me. WTF? Get off!

Finally I just gave up and took the stage with some of the girls. Yes, I chose being objectified over being molested. But that was short-lived since I couldn’t keep it up, and it gets hot under the spotlight. And so afterward, I resigned myself to a dark corner of the bar behind some tall guys to quietly observe the action.

I would have ordered another drink but didn’t feel like pushing through the sardined crowd to get to another badly made Captain and Coke ($7). The bartender said it was regular Coke, but the taste said otherwise. Bleh.

I knew things were bad when 1:30 a.m. came around and I was sad it wasn’t last call yet. Here in Vegas we had two more hours to go.