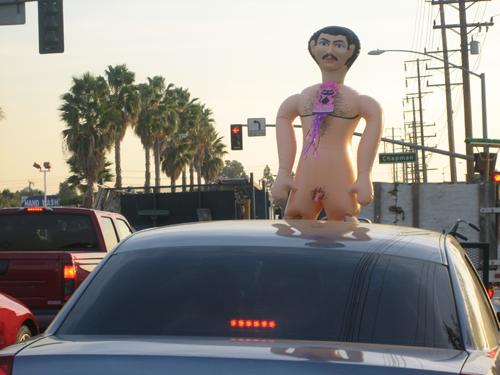 OK, let me preface this by saying this isn’t Vegas’ fault, the fact that I’m currently taking part in what is probably the worst bachelorette-party-in-Vegas experience ever. But it certainly hasn’t endeared Sin City to me either.

First off, I hate bachelorette parties. Drunk girls screaming out the sunroofs of limos, drunk girls pawing strippers, drunk girls playing drinking games, drunk girls dancing on tops of tables and drinking from penis-shaped sippy cups…not my thing. But I went anyway. Dre sold it to me as a good time and since she’s never steered me wrong before, I was game. “We don’t have to do anything we don’t want to,” she promised.

I took Friday off so that all 10 of us could pile into the party RV in the morning and head out to Vegas. Thing is, when we set out at 10:30, the RV broke down at 10:35. One of the “bachelorette’s” husbands came out to fix it while we were stranded in front of a donut shop in Fullerton. OK, fixed. All it needed was to have its oil thingy replaced. That took about an hour and we were off again.

This time we actually made it on the freeway…for about 15 minutes before the RV broke down again. Some of the girls were already drunk at this point. One girl was on her way to self-obliteration after sucking down three 40s of Smirnoff Ice. Later, she puked and pissed herself from laughing too hard. Nice. 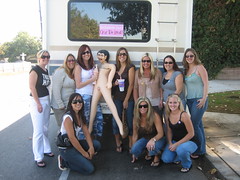 The “bachelorette’s” husband again came out to our location to check the RV. This time it was irrepairable and we had to rent a minivan instead. Problem is, there were 10 of us and all our luggage, ice chests and bags of food. We were able to borrow someone’s Chrysler 300C but even with our rented Pacifica, we were one seat short since we had to fold down the third row for cargo. Someone came up with the bright idea of creating a makeshift center seat in the second row of the Pacifica.

I wanted to just cut my losses and go home. That’s BS making someone sit bitch all the way to Vegas. Totally unsafe, nevermind uncomfortable. But Dre, ever the super trooper, took the seat. I owe that girl a massage at Burke Williams or something. She wouldn’t let anyone else trade with her cuz she knew how miserable we all already were.

By the time we hit the road again it was 4 o’clock, just in time for rush-hour in San Bernardino. The 300C with the drunk girls (except the driver of course) took off before us and our lone Pacifica made its way at a snail’s pace to Vegas. Turns out the 15 South was closed causing all sorts of backup, something we’ll have to look forward to on the way back on Sunday. Could this weekend get any worse? A number of us wanted to turn back. Maybe all this suckiness was a sign of bad things to come and we should just call it a day. While others in the car wanted to soldier on, perhaps this comedy of errors is just paying dues for the awesome time we’re going to have.

In the end, hope for better things won. By the time we made it into the city it was 10:30 at night, a full 12 hours from when we had initially set off. “We could have been in Salt Lake City in the same time,” one of the girls said. Arrrrggh! After we unloaded the cars, the drunk girls were still raring to go. They wanted to hit up Body English at the Hard Rock. Me? Too tired and annoyed at this point, I opted for staying in and bitching about everything on my blog.

Hopefully things will only get better from here.