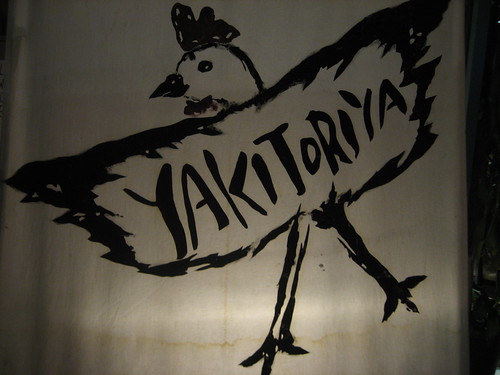 I mentioned Yakitoriya briefly yesterday, but for the record I am so not going back there. Quickest assessment ever, I was only in there for 5 minutes but that was enough. Again, this was when Julie and I were starving and looking for a cheap place on Sawtelle to grab some dinner…before the glorious Orris experience. She suggested Yakitoriya since she had gone there before and loved the meats on sticks.

So we ducked in and grabbed a seat at the bar even though there were still plenty of free tables. The waiter handed us the menu, I sat there trying to figure out the offerings, was put off by the prices and disturbed by the thought of gizzards on a stick. Julie decided on the $17 five-stick dish and I opted for a more doable small-size soboro rice bowl with a stick of breast meat. It would add up to about $10. Still more than I wanted to spend here but whatever.

But when the waiter took our order he said that I had to order the five-stick dish. Julie explained to him that I only liked the breast meat and didn’t want the quail egg, thigh, gizzard, or whatever other unsavory part of chicken they were offering.

Unsympathetic to my unadventurous palate, he suggested that we go in on the $27 nine-stick dish. “But that’s too much for me. She doesn’t want anything other than the breast,” Julie explained. “Since she doesn’t want that much can she just get maybe side dishes and…” The waiter shook his head and basically said that wasn’t allowed either.

We got up, said sorry, and left, which was just as well since there was something better waiting for us down the street.