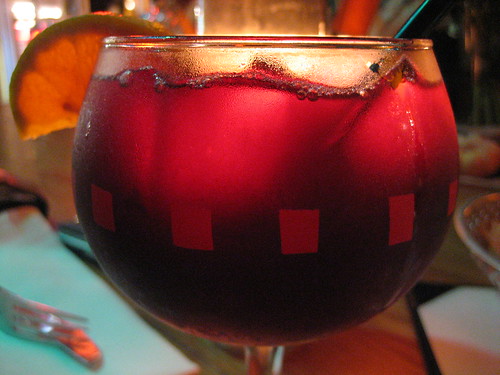 When it’s Monday and I’m in need of a nearby happy hour (since Bodega Wine Bar and Air Conditioned Lounge seem to be closed on Mondays, boooo!), the usual fallback position is Border Grill in Santa Monica. Not saying that it’s settling, it’s just sometimes a girl wants a little variety and something stronger than sangria and margaritas. But the cheap happy hour prices keep me coming back.

The $3 appetizers are definitely worth more than you pay for in terms of designer food that’s tasty in all right portions. I recommend the green corn tamales (sweet!) and carne asada tacos (savory). And even their fries are yum: crispy, fresh, perfectly seasoned. For two people, ordering just three dishes was enough to satisfy afterwork hunger.

When I ordered the tamales, my friend

Julie said that she usually doesn’t like tamales (which I couldn’t understand) and that I could have them all to myself. But after some coaxing she took a bite and was suddenly a fan, amazed that they tasted so good.

The sangria I ordered wasn’t all that strong though. It was OK but I think either they are watering down their drinks or I’m just building up a tolerance because in the past two sangrias was enough to achieve a nice buzz. Now, two doesn’t do it for me. If sangria isn’t for you, there are always the $3 mojitos, margaritas or imported beers to choose from.

Happy hour at Border Grill tends to get packed so good luck finding a place to sit along the bar or the communal seating around the square table near the front at the height of it (around 5-6). It’s best to get there at the beginning of happy hour at 4 or near the end at 6:30.

Border Grill is a boisterous, bustling place and reservations are definitely recommended for Friday and Saturday nights. If you do take your chances, you might just find yourself waiting at the bar or mesa grande, a huge, low table, in which case you can order a pitcher of fresh Sangria, felt by many to be some of the best in town.

There’s also the popular late night happy hour on Fridays and Saturdays after 10pm, which I’ve never been to but friends have raved to me about them. I think they have live music during those and tend to get really crowded.