Molly Malone's Irish Pub: Where Everyone Could Know Your Name 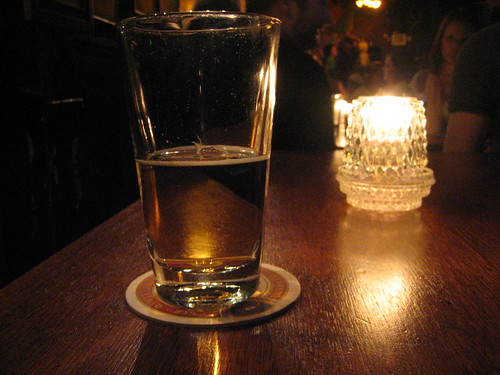 When my friends and I found ourselves in West Hollywood last night in a state of unfancy dress with a craving for cocktails, I racked my brain for a bar where we would feel comfortable showing up dressed down. No to Lola’s, obviously, and teeny-tiny Dime was packed with a crowd of people spilling out onto the street. An Irish pub seemed to be just the ticket and since I have already gone to Tom Bergin’s several times before, I voted for checking out Molly Malone’s Irish Pub on Fairfax.

As one of the first city taverns re-licensed after Prohibition, Molly’s has always occupied a spot in the hearts of locals. This cozy venue specializes in traditional Celtic and contemporary folk sounds, plus rock and blues. Neil Boyle’s portraits decorate the walls, highlighting 30 years of Molly’s regulars.

We easily found parking around the corner on 6th Street and before we could make our way inside a mass of people exited the bar opening up a corner booth inside. Score! The place was buzzing but not too packed. We could still squeeze out a spot at the bar to place an order. I loved the ’80s music blasting out of the speakers but couldn’t hear the bartender. I ended up yelling my order over the counter but when she repeated it back to me she didn’t bother to raise her voice so it just sounded like she was whispering. I got the feeling she was fed up with people “yelling” at her all the time. Well, don’t play the music so loud then. Eesh.

I ordered up Jameson on the rocks ($7) but she ended up putting too much water and ice so my drink ended up tasting like ice water with a hint of whiskey. “Next time ask for just three ice cubes,” my friend Kevin suggested. Nope, next time I’ll ask for neat. Kevin had ordered a black and tan which tasted fine but wasn’t poured in that way that separates the black and tan beers. Instead it was just a mix of the two, even though she did use a spoon. “So what?” you may say, “It ends up in the same place.” But pouring it so that you can see the black and the tan is an art, I tell you. So why be sloppy about it?

But the important thing was that we had a great vantage point of the bar from our booth. The crowd consisted of young people, some wearing suits and others wearing hoodies. Some cute boys. All were friendly, no pushing or shoving in the tight quarters. One guy even asked ever so politely if he could put his beer on our table while he grabbed a smoke outside.

Being about 40 years old, the bar had a well-worn feeling, unlike the polished Finn McCool’s and O’Briens on the Westside. It definitely was a lot more down-to-earth with a younger crowd and less yuppies. Too bad it’s far from my regular stomping grounds. True, the bartenders could be better but yay for the low-key atmosphere and killer jukebox.

BTW, if you don’t bring cash, there’s always the in-bar ATM or you could use credit cards if you plan to spend more than $15.