Tiny's KO: Bringing Hollywood Back Down to Earth 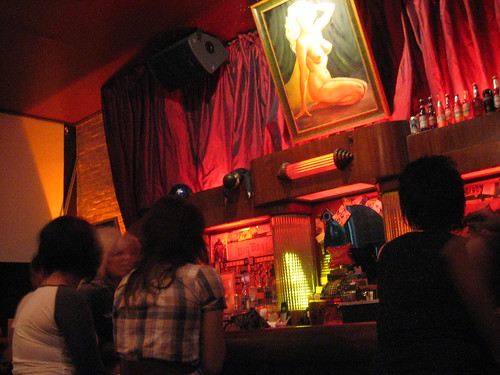 Stephanie from Yelp, gosh bless her, was the one who introduced me to Tiny’s KO, a low-key “dive bar” on a boulevard looming with fancier-than-thou Hollywood hotspots. When me, Steph and some other Yelpers went, we were all a little tipsy from the happy hour at the Well beforehand but still sober enough to find our way through the Cahuenga Corridor to this little gem off to the side on Hollywood Boulevard.

I knew this place was special as soon as I walked in and saw the jukebox, the vintage paintings of nekkid women on the walls and the eclectic bar crowd of punk rock girls and drunk frat boys. But what made me really fall in love with the joint was the menu. With names like “Teenage Lobotomy” ($7) for the veggie burger and “A Little T&A” ($7) for their BLT, how can you not want to order something just for the sake of asking for it? 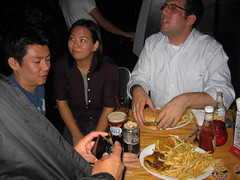 Since I wasn’t all that hungry, thanks to the Well’s happy hour morsels beforehand, I only had enough room in my stomach for some fries which I snagged from a Yelper’s order of the K.O. Burger ($7) while he wasn’t looking. What? He had a heaping stack of ’em.

I always say you can judge a restaurant’s food by their fries and from just tasting Tiny’s, it’s allll good. (Plus many online reviews have raved about the food here.) The fries were not greasy but crispy with just enough salt to make them savory and addictive. Yes, a bar that serves non-greasy spoon diner food. Score! And apparently they also serve Sunday breakfast where you can enjoy some NFL with your French toast.

I don’t know how much the drinks are since I wasn’t buying but beer is about $4, pretty good considering you’re just down the street from $6-and-up beer places like Mood, LAX and Holly’s. In any case, it’s nice to know that if I ever feel like having a kickback night away from West L.A., I can now go to Hollywood for it. Yay! Another bar to go apres a movie at the Arclight!