The Bowery Bar & Bistro: In a New York Moment 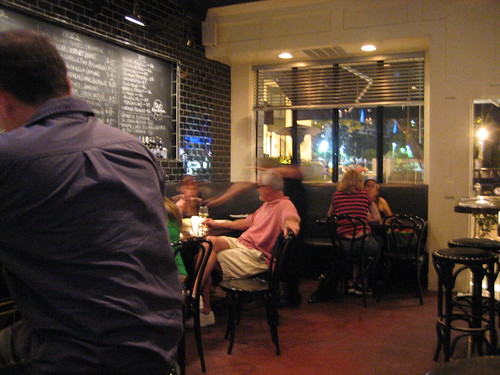 I’ve always wanted to check out the Bowery Bar & Bistro on Sunset. I knew it was in Hollywood somewhere but had no idea that it was located just down the street from the Arclight. Had I known that I would have certainly gone there for a preshow dinner/cocktail instead of trying my luck at the long waiting list in the Arclight’s Cafe Bar.Just east of Vine and located next to Magnolia, the Bowery offers some outdoor seating. But forego the Sunset Boulevard traffic and smokers for a lovely seat at a tall table, at the bar or at one of the tables near the front window. People say the Bowery is like a New York bar/restaurant, I think, because it’s straightforward and simple in its design: black, white, tiles, chalkboard. None of the Moroccan/Bollywood/Bali exotica of canopies and warm colors.

There, I met up with a couple of girlfriends, Lillian and Valerie, since it’s central to all of us.Drew, our waiter, was a tall drink of water who I was instantly wary of because he looked like the type who knew he was good-looking. But he was friendly enough, even playfully batting me on the nose with the slip of a cocktail menu when I sent back the Caipirinha Bahia ($9) because it tasted more tart than the sweet he had originally promised. 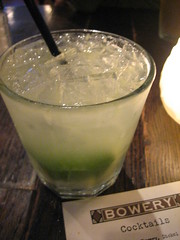 I normally hate sending things back but my girlfriends tasted it and decided, too, that it had a weird, sharp aftertaste. “It’s the pitu,” Drew explained as if we would instantly understand what that meant.In any case, I traded that in for a Velvet Underground ($9): Creme de Mure (blackberry liqueur), frangelico and milk. Drew set the brandy-glassed concoction before me and said, “I know you’ll like this drink because it comes with…CHOCOLATE!” and with a sleight of hand a small wrapped square of chocolate fell before me. Yay! How did he know? I just met him!Each of us girls took a sip of the drink and decided that even though it tasted like dessert in a glass, it was wayy tastier than that caipirin-yuck.After finishing off that cocktail and moving on to a glass of Delirium Tremens ($8), I was getting hungry. Even though the Franco-American dinner menu offered an enticing selection of pan-roasted chicken French dip sandwich, a Bowery burger with any high-end cheese you want, and a fancy “Macaroni au gratin,” I opted for the Mesclun Greens salad ($8.50). I would have ordered the usually tempting Spinach Salad ($9) with bacon, hard-boiled egg, candied walnuts and sweet sherry vinaigrette but there was the small matter of the ecoli scare.From AOL Cityguide:> Whether you jones for the smothered minute-steak sandwich, short ribs of beef, croque monsieur or the New York strip, you will find the perfect wine, beer or cocktail from the generous bar to pair with your meal.Truth be told, I was a bit disappointed by my salad. The menu listed that it came with baked chevre (mmm!) but it was just goat cheese smeared on pieces of bread (meh). Valerie said that that’s how she’s normally seen “baked goat cheese” but when I went to the Alcove in Los Feliz they had lovely encrusted chunks of baked goat cheese on their salad. No such luck here. This salad was awright for a balsamic vinaigrette salad with pieces of goat-cheese-smeared bread but not for $8.50. It almost made me wish that I risked getting ecoli.And Valerie had ordered the French dip, but I don’t think she realized that it was chicken since she kept saying that the broth tasted like chicken. The only dish we were really excited about at our table was Lillian’s shoestring fries which she ordered with a side of mayo. They were soo tasty, crisp and salty. Perfect. 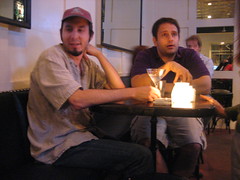 As we munched our food, we enjoyed the bar scene. A couple of TVs hanging over the bar entertained patrons, all men, sitting at the counter with eyes transfixed by the football game. Young couples in love and groups of nice-looking people took up the tables in the front of the restaurant. It was a nice, mellow scene and I loved how a lot of the young guys wore hats. Baseball caps were outnumbered by newsboy hats, giving it a real Gotham feel.We were even able to convince the guys at the next table to pose for a picture and they obliged. Loved that. No attitude or suspicion. Even people across the way wanted their picture taken.The Bowery is a really a nice laidback alternative to the Hollywood bar scene just up the street if you just want a drink without the velvet rope.The Bowery
6268 Sunset Boulevard
Los Angeles, California 90028
(323) 465-3400