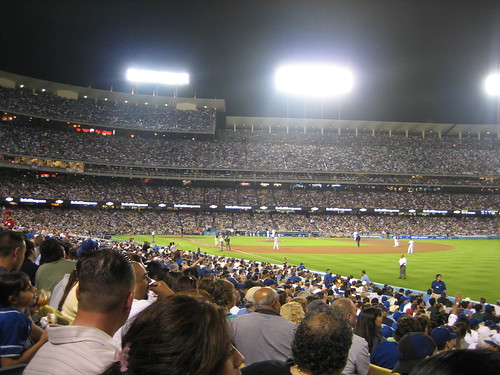 After living in L.A. for as long as I have, it’s a wonder that I’ve never gone to a Dodger game at least once before. I’m not a baseball fan, or a fan of sports in general, but that’s no excuse. Los Angeles has a baseball team, I should at least represent.

So when Goldstar Events had a promotion offering 50% off Dodger tickets on Fleece Blanket Night, I had to go. It was for the game against the San Diego Padres, Monday night. Yes, THAT game.

I went with my friend Scott who is really an SF Giants fan but was willing to come along to school me in the finer points of the game. Baseball looks so boring when watched on TV, but according to him it’s all about watching it at the stadium while enjoying lots of beer and hot dogs.

So after suffering through much traffic trying to find a place to park, we arrived at the stadium five minutes after the game started and were still able to score a free Dodger blanket. Hee! Then we roamed for ages trying to figure out where our seats were located. Something about Field 46. After asking directions from three different people we found them. Pretty cool seats, right off the field and surrounded by hard-core Dodger fans.

Throughout the whole game they kept shouting, “On your feet, Dodger FFAAANS!” and we had to stand up on our feet and clap when some Dodger was up to bat or when bases were loaded. Then some kid kept yelling, “Here we go, Dodgers, here we go!” after which we’d have to clap twice. Over and over again.

Fortunately, Scott and I had two large beers, a Dodger dog, nachos with machined cheese and a bag of peanuts to keep us entertained. Evil, but so goood.

Sitting in the stadium, I felt like I was in a totally alien world. Just all the weird things that went on that was the norm for everyone else but bizarro to me. Like the wave or people being so unbelievably mean to Padre fans. And like the beach balls in the crowds that meanie security guards would pop when they got a hold of them. What’s up with that and why spoil the fun?

And the 7th Inning Stretch when everyone gets up on their feet and sings “Take Me Out to the Ballgame.” Scott said this tradition originated when some American president stood up at the beginning of the 7th inning, thinking the game was over and that out of respect the crowd stood up, too. But when he realized he was mistaken, he tried to play it off by stretching. Who knew?

So it was in the 7th inning when something happened and Scott groaned and said, “Well that’s the game.” This seemed to be confirmed by a lot of the Dodger fans leaving. There apparently were three more innings to go and yet people were clearing the stadium. I asked Scott if we should go then to which he said, “Yeah, that’s pretty much it.” The score was 5-9 Padres and since I didn’t know anything about baseball I took his word for it.

It wasn’t until we were in the car leaving the parking lot when a loud roar sounded from the stadium…followed by another one…and another one…. And then everyone in the parking lot started beeping their horns. Scott and I scrambled to find the game on the radio where we heard the announcer say, “I’m in shock. In all my years I’ve never seen anything like it.” FUUUUUUUUUUUCCCKK!

Apparently, the Dodgers had four home runs in one inning, something that hasn’t been seen since 1964. Yeah, I’m kicking myself. My first Dodgers game and I missed THAT. I guess that’s why they say, “It ain’t over til the fat lady sings.”

Well, at least my first time was really memorable.