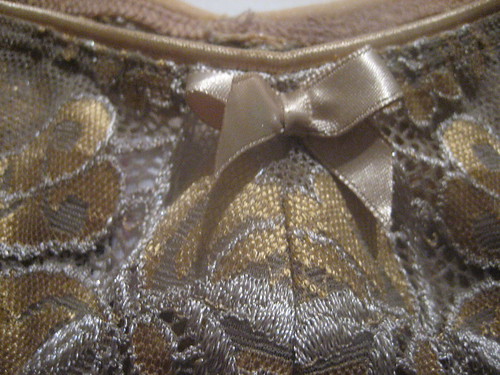 This weekend was my friend Marilyn’s wedding. She had it at the Ritz Carlton in Laguna Niguel. Now, I know she’s not going to kill me for telling this story since everyone from the Ritz’s hairdressers to the valet has heard it from her and her maid of honor but….

On Saturday, at 9pm the night before her wedding she realized that she had yet to buy panties to wear under her white gown. Since her gown wasn’t the traditional heavy kind with a lining, opting for any colored underwear was out of the question. And ferget commando. That combined with a sunny morning spelled potential disaster for wedding pictures.

Since it was too late at night for any of the nearby stores on Fashion Island or the Irvine Spectrum to be opened we worried that she would just have to be SOL on her wedding day. Fortunately the Ritz’s concierge called nearby resort and spa,

Montage, knowing that they had a boutique that sold underwear. Unfortunately, they, too, were closed. BUT after explaining the situation to the hotel manager, he agreed to open the store to accommodate our bride.

Rushing over to the resort and pulling up to the valet revealed a crowded driveway. Youngish people pulled up in ultraluxury cars. It looked like an L.A. hot spot.

We didn’t want to valet but were afraid of being hassled by the valet guys. Fortunately once we told them that we were just running in for something, without any questions they directed us to an open spot to park, without a trace of attitude. It was weirrrd. If this were in L.A., I doubt we’d get the same genuine kindness.

Short story long, once inside we found the hotel manager who promptly took us to the closed boutique where we made a mess of their panties section, digging for a nude and unruffled pair. Not surprisingly the average price for said lingerie was about $55. Mar quickly picked a nice golden tanga cut and we were on our way. Crisis averted.

I found out later from wedding guest/playa, Ty, after telling him the story, that the Montage is actually a great place for the young and hip well-to-do to stay in Laguna. It looks nicer than the Ritz, feeling more like a lodge with its hardwood floors and dark wood wall panels. Ty said that while he spent a weekend there, he had shared some cocktails with a bevy of young ladies in the resort’s jacuzzi. And even though it was late at night the hotel staff continued to serve them drinks. Didn’t cramp our boy’s style by shutting the jacuzzi down because it was past closing time. Only asked them to not bring glasses into the water for “safety reasons.” Now that’s class.

Should I ever win the lottery, that’ll be the first place I check in.