Doing Up Vegas in L.A. Through Sick & Sin 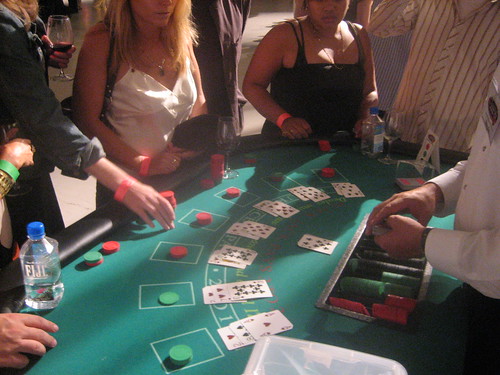 I ain’t a gambler but I was still looking forward to Vegas in L.A. way back in April ever since Dan from CozmoCard told me about it. Wine and food tastings, a dj, and partyers hoping to evoke Sin City in Santa Monica — sounded like a blast.

My friend Dre, a foodie and wine conoisseur, was going to be my partner in crime in sampling wine and food from the best wineries and restaurants throughout the event. Unfortunately, days before the event we both got really sick. She got the flu and was incapacitated and I just got an annoyingly leaky cold.

So at the last minute I got my friend Scott to take her place. A Black Jack player and a fan of the vino, he was sure to enjoy himself there. Naturally, we got there a half hour early and just walked around the Barker Hangar watching everyone set up. There were the tables for the silent auction which offered the likes of bottles of wine and a weekend in Vegas to lucky bidders. Minimum bids were way out of my price range at $1,500 so forget that.

The Barker was laid out with wine and food vendors lining the walls while all the casino tables were in the middle of the hangar. These remained empty for a large part of the evening as revelers were emboldening themselves with the liquid courage provided by the 50 wineries in attendance. My fave wines were the

Cobblestone Cab, Giessinger Surrender and Bonny Doon Muscat but it was weird to me that we couldn’t purchase those at the event. Instead I had to content myself with signing up for email lists and collecting pamphlets on the wineries.

Favorite foods of guests were the coconut cream tartlets from Luna Park and the Sushi Girl tuna wraps — the line for her booth was always at least 10 people long. When 8 o’clock rolled around, people started swarming the casino tables. The poker table was naturally all full up with World Poker Tournament wannabes. 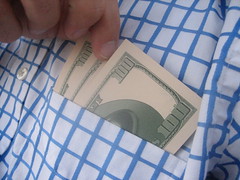 Scott and I finally checked out the Black Jack table, ready to double our fake money. Sure enough, being the expert player that he is, he took our fake $200 and turned it into $1,200. “Too bad this money is fake,” he said wistfully. But after losing five hands in a row we cut our fake losses and cashed in the chips for raffle tickets.

Unfortunately the line to cash out was very long and oh-so slow moving and everyone was so grumpy. When I got near the front of the line and one of the cashiers waved me over, I got yelled at by people in line and even the “line monitor” for “cutting in line.” It was scary how everyone got so mad and serious. It’s fake money, people! “What about that line of cutters over there?” I gestured to a renegade line that had formed off to the side. “I’m doing the best I can,” the line monitor whined. Eventually, they got more people to cashier and make the line move faster. And when we wanted to pick up our gift bags there was another line for that. People in front of me complained about how it felt like the last hour of the event was spent standing in lines.

After standing in all the lines we had to, we finally retired to the South Beach-looking VIP lounge to wait until the raffle began. At 9:30 I was already beat. Scott suggested that we make someone’s day and just give them our raffle tickets but I wanted to stick around despite feeling fuzzyheaded just in case by some strange luck we won something. After sitting around for just 10 minutes staring at other partyers who looked just as beat as I did, I was close to calling it a night until finally I heard Dan’s voice over the speakers. The raffle was starting.

Suffice it to say, I didn’t win ANYthing but the lucky few who did got prizes like a weekend stay in Vegas, bottles of wine and some other stuff I ferget.

Since this is going to be an annual event, I’m looking forward to checking it out again when in better health.

Some things I’ve learned to make next time easy going: