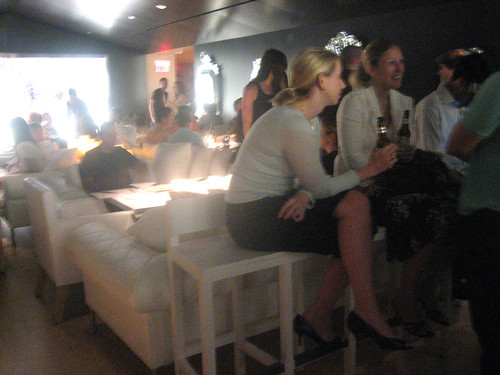 The too-hot-to-trot Hollywood scene seems to have found its way to Brentwood, with Katsuya taking over the old El Dorado restaurant on San Vicente. And I just had to see how Sam Nazarian’s newish venture, a Philippe Starck-designed sushi restaurant showcasing master sushi chef Katsuya Uechi’s talents, heats up an old, almost-forgotten space.Gone are the warm colors of the El Dorado replaced by cold black and white hues and white lights. Starck’s floorplan makes use of the lower dining area and old dancefloor backroom and transforms the space into a giant bento box with sections for an outdoor terrace, a sushi bar, a Robata bar and a lounge area.

We walked in at 8:30 with 10:30 reservations (the earliest we could get calling in the same day) but were welcomed to sit in the Dragon Room, the back bar. It was a great alternative to the bustling scene of the main dining room where you couldn’t really converse above the din of preening glam diners schmoozing it up and picking up. Walking past B-list celebs like Kim Cattrall and that guy from Wings, we ducked into the back room, a chic lounge with couches and white candle pillars.Fortunately there were two spots at the bar (my fave spot to sit anywhere for its immediate service), right in front of my new favorite bartender Kylee. She didn’t have any of the attitude you’d expect someone who worked in a chi-chi place like this to have. As a matter of fact, neither did the hostess or any of the servers. They were all very accommodating and friendly, as if nobody told them that this was in fact a Hollywood West hotspot. People pull up to the valet in Lambos, fer crissakes. 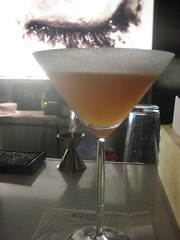 After perusing the specialty cocktail menu and not finding anything remotely chocolate I turned to Kylee. She suggested the Burning Mandarin ($11), which at first glance seemed unappetizing, but to hear her sell it I had to have one. Skeptical of the use of chili in my cocktail, Kylee convinced me that the sugar-rimmed glass would cut that bite down. And she was right. It was a surprising explosion of flavors on my palate. Not too sweet but definitely spicy.My friend tried the Katsuya Fresh ($11) which Kylee introduced as spiked spa water with its light cucumber flavor. Cucumber? Chili? What sort of cocktail list was this? Kylee said that the restaurant hired a mixologist to create the unusual cocktail menu with white grapefruit cosmos and watermelon cucumber mojitos; and the bartenders then had to take lessons day and night perfecting the technique of mixing the Katsuya cocktails. And the lessons paid off as it’s a treat to see them at work, squirting peach puree, garnishing with jalapenos and holding their cocktail shakers high.For dinner we ordered the sushi and sashimi platter ($23), a variety of morsels selected by the chef. I’m not a sushi connoisseur but even the simple California roll tasted nice and fresh.From Taco:> The sushi here is clean and delicious and Katsuya’s best asset is the direction of its Master sushi chef Katsuya Uechi. The fish is served authentically, creatively and also in the Westernized roll styles we expect here in Southern California.For dessert, Kylee suggested the red bean sorbet or the chocolate cake but we just had to try a sushi bar’s version of the tiramisu ($8). It wasn’t dry but it wasn’t flavorful either. It just tasted like a very creamy cake with a hint of chocolate. There was none of the liqueur or coffee taste a good tiramisu would evoke. Fortunately, on Kylee’s suggestion an after dinner drink of Frangelico with lime provided the sweet flavor my dessert was lacking.Would I come back ever again? Sure, if I ever have a hankering for a crazy cocktail with a side of Hollywood flash. Katsuya Brentwood is one of many Katsuyas hitting L.A. with plans to open one in Hollywood and in the Staples Center.11777 San Vicente Boulevard
Brentwood, California
(310) 207-8744