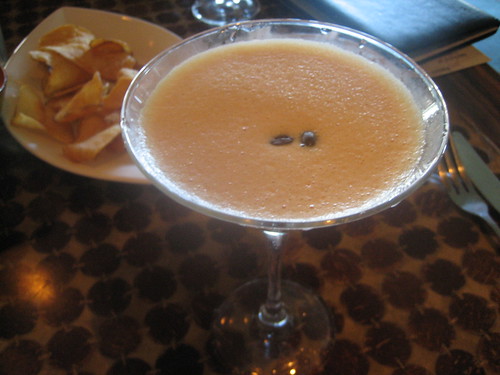 Last year Ma’Kai Lounge in Santa Monica was one of those places that almost made it on my list of places I would never show my face in again because of its ugly-people meat market situation and weak, high-priced drinks. I forget how it escaped the list but that was so long ago. And I figured I’d give it another chance as my friend and I wanted to grab a snack and cocktails before our movie on the Promenade during a Sunday evening.

I knew Ma’Kai had a happy hour but I didn’t know that on Sundays from 3 to 7pm the restaurant/bar also has a luau complete with hula dancing and live Hawaiian music. Sounds like a perfect situation: the restaurant faces the ocean and has a nice lanai that’s perfect for people watching passers-by on the sidewalk as well as viewing the sunset, a soft breeze wafts into the restaurant evoking a summery beachy feel.

With such a setting, I was ready to check out their luau menu. Two platters are offered and both come with poi and sweet potato chips, macaroni salad, cabbage salad and fresh fruit. The Makai platter ($45) offered macadamia nut crusted mahi mahi, lomi salmon, coconut shrimp and poke. The Mauaka platter ($40) came with kalua pig, laulau and Hawaiian BBQ ribs. But if you don’t want that much food, you could also order a la carte. So we got the ribs ($14) and laulau ($10) — ginger chicken and pineapple coconut rice.

For drinks, there isn’t a Hawaiian drink menu oddly enough but there is a specialty cocktails list. For some reason I ordered the espresso cocktail ($5 happy hour). Don’t remember if there were mai tais on the list. Unfortunately I think since I was expecting something in the key of chocolate martini with a coffee taste I was surprised and disappointed that the cocktail tasted so bitter, not at all yummy. 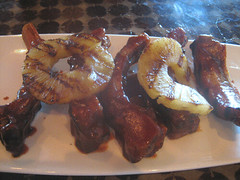 My laulau arrived and wasn’t at all what I expected. I thought it would be a mound of pineapple coconut rice with chunks of ginger chicken, but instead it was three round breaded-looking balls. Not at all appetizing-looking. When I took a chunk out of it and put it in my mouth I was even more dismayed to find that it wasn’t the explosion of exotic flavors that the menu’s description lead me to believe. Rather, it was bland and dry. I asked the server if they had any sauces for it. She only offered their “spicy mayo.” Desperate for anything, I settled on this clash of flavors but at least it was easier to swallow. The ribs were pretty tasty but most anything slathered with bbq sauce is, so that’s not saying much.

As for the entertainment, they wheeled a big Hawaiian guy playing a ukelele around in a wheelchair while some non-Hawaiian-looking girl did the hula, reminding me that I wanted to take hula lessons. They played to the makai side (facing the ocean) of the restaurant and to the adjacent patio; and I was hoping that they would play to our corner of the restaurant, where all the dining tables are located. But I saw when the lady wheeling the ukelele player started moving toward our corner, which only had three small groups of people sitting there, the hula girl waved her hand and mouthed, “No.” I guess because we weren’t a big enough audience.

Anyway, I think Ma’Kai gets points for offering a “luau” on Third Street Promenade which could be a nice change of pace for tourists or those looking for something a little different. I’d only return for their Sunday luau to maybe order up a mai tai, grab a seat on the lanai to watch the sunset and enjoy the ukelele playing. But ferget the overpriced luau platters and the specialty cocktails list.