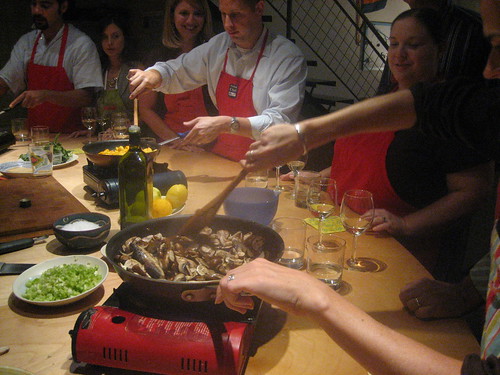 I used to love cooking, baking and entertaining but ever since I fell out of love with my kitchen, I stopped cooking altogether. Fortunately, my foodie friend Julie turned me onto Hipcooks.com. Her friend Monika teaches cooking classes out of her loft in the Brewery district. There she’ll school an intimate number of students in the fine arts of all things food, from tapas making to how to throw a dinner party for 15 people.

Julie took the pasta making class and loved it, saying it was also a great place to meet people, re: cute boys. But since she said her pasta class had mostly women, she suggested that I try the “How to Make a Romantic Dinner for Two” class. The theory being that guys are always trying to find new ways to get game, and what better way than cooking for a lady? So since Julie suggested that I bring someone of the same sex with me to a class if I had to bring someone along, I dragged my friend Erin, enticing her with the promise of meeting men all the while learning something new.

Since we arrived a half hour early for the class, we grabbed some Delirium Tremens from Barbara’s at the Brewery. After achieving a nice buzz, we made our way to the class. The last to arrive, we were dismayed to find the 10 other people in the class were actually married couples. I know. Booo! I immediately leaned over to Erin and whispered, “I’m sorry.” To which she replied, “I’m just glad we drank before we came.” 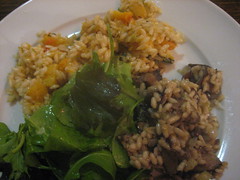 For this class we learned how to make butternut squash risotto and mushroom risotto as well as lemon raspberry creme brulee and orange ginger creme brulee — dishes that seem too hard to make for someone with limited experience. Fortunately, Bonny, our instructor, was fun and very informative. She explained things in easy-to-understand terms and made sure the learning process was anything but boring or intimidating. We didn’t follow any recipes but did a dash of this-n-that and taste-tested a lot. For those who really need to work with a recipe, the instructors email you the recipes you learned about days after the class.

Because of the small number of students, everyone was able to participate and work hands-on with the cooking tools and food provided for us. The only minor complaint I have is that while I was busy stirring this or grating that, I didn’t get to pay attention to what Bonny was saying so felt like I missed some important instructions.

No anal-retentive, happy-homemaker perfectionism here. [Monika] Reti preaches spontaneity and inventiveness, and she won’t ask you to buy a million ramekins or measuring instruments for the sake of a single dish.

After learning some basic knife skills from Bonny, i.e. how to hold a knife properly and the different ways to slice things, she presented us with a tray of appetizers and some wine. She seemed to be a big proponent of Trader Joe’s as a majority of the ingredients from the meals came from there. Her apps were very simple and easy to make and still oh-so yummy. There was buffalo mozzarella doused in olive oil with a sprinkling of parsley as well as goat cheese with parsley and oven-toasted baguette slices rubbed with garlic clove. 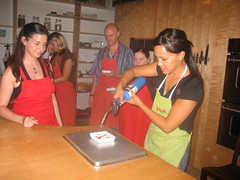 The risottos employed two different broths: vegetarian and chicken and surprisingly veggie tasted way better. The creme brulees were easy to make, and I have to say that torching the sugar was my favorite part of the class. Heh heh. Fire.

In the end after we finished putting together our meals, we were instructed to do one last thing: enjoy the food. So we grabbed some plates and piled them with our creations and all sat down together at the dinner table.

At dinner we found out that it was everyone’s first time at hipcooks. Apparently that’s a rare thing since usually there is at least one or two repeat students taking a class. But, here, everyone had found out about the class from other friends who have taken it before and really enjoyed it.

As for meeting people, the married couple sitting next to me suggested that maybe I try hipcooks’ “The Thrill of the Grill” class if I really want to meet guys. True!