Holly's West: How To Be an Unpopular Popular Girl

Last night my peeps from LA.com threw yet another one of their wonderful free-drinks-and-appetizers parties promoting their food newsletter, Fooditude. They always pick a hot new restaurant for the venue and this time it was at Holly’s West in Santa Monica; the Westside sister to Hollywood hotspot Holly’s.

Hollywood Holly’s is popular among the poopular Hollywood kids whose airspace is protected by the bar’s exclusive guest list and beautiful-people-only door policy. Since that’s definitely not my scene, I was excited to check out the Westide location, said to be a bit more laidback. And in anticipation of a capacity crowd, me and my girlfriends arrived way early, in time for the tail end of happy hour: $5 well, wine, beer and appetizers.

Right away I ordered a whiskey and Coke while the girls decided to order two plates of chicken skewers to nibble on. Unfortunately my drink was kinda weak (and frankly $5 isn’t all that great a price for a well cocktail) and

Dre and Julie were so grossed out by the chicken skewers that they could barely finish one of the plates. 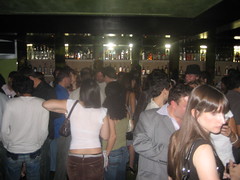 Then the party got underway and the place seized up with a packed crowd of LA.com followers and then some. Waitresses in red skin-tight sateen mini dresses and red thigh-high fishnets sashayed around with appetizers, but never came around to us for some reason. And we were seated! Whatevuhs. Just as well considering how well the chicken skewers went.

Dre tried out the free sangria and complained that it was “the nastiest shit” and I took a sip to confirm that, yes, it wasn’t the best sangria I ever tasted as it was watery and bitter. But maybe that was just cuz it was free?

Fortunately, the girls and I kept running into old friends at this shindig. But then we all pretty much ended up bad-mouthing the joint: “This place is nothing like Holly’s,” “What’s up with that weird outfit the waitresses are wearing,” “That manager guy has a hair up his ass,” and “There’s only one toilet for women, no lock on the door and no toilet paper!”

After standing in a non-moving bathroom line for awhile listening to even more bar patrons complain, I decided to try and salvage the evening by calling it a night at Holly’s West, grabbing the girls and seeking better cocktailed lands elsewhere.