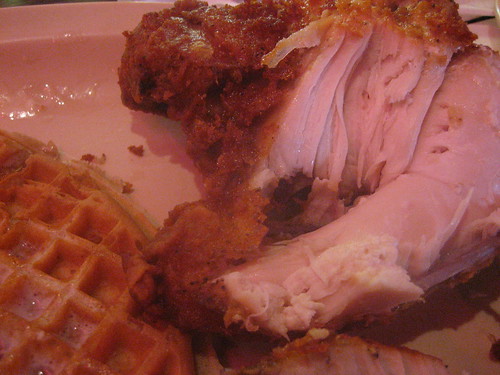 The last time my sister Sizzler visited (pre-vegetarian years and when she still lived in Japan) we got into a huge knock-down-drag-out fight because I didn’t take her to Roscoe’s Chicken & Waffles. “What’s the big deal?” I asked, ducking her dukes, “It’s going to be there forever and…IT’S JUST CHICKEN!” Suffice it to say, that did nothing to calm her down and we didn’t talk for a long time after that.

So when she came around again this week, a newish vegetarian, with her husband David in tow, it was surprising when she asked me, yet again, to take her to Roscoe’s. It was made weirder by the fact that she infected David with her Roscoe’s addiction. Now he kept asking to go, too. “When are we going to Roscoe’s?” “Do we have time to go to Roscoe’s?” “Are we going to have lunch at Roscoe’s?” Aarrggghhh! WTF? “It’s not even lunch time, David!” 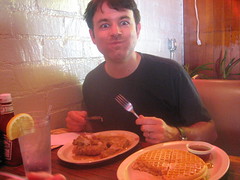 I finally relented and even though we had a big brunch, we had no choice but to go to Roscoe’s for “linner.” The good thing about that though is that the Pico location was fairly empty around the 4 o’clock hour so we were promptly seated and our food came in what seemed like five minutes from the time we ordered.

David ordered sister Sizzler’s old favorite, #2 the ‘Scoe’s Special with chicken smothered in gravy and onions and two waffles ($9.20). My sister made do with…I’m not sure what since it wasn’t chicken. I settled on #13 “Carol C’s special” (no relation), a succulent breast and one waffle, with a side of gravy ($7.40). Sooooo goood! Suddenly I wondered why I was fighting going to Roscoe’s all that time. And then I felt a layer of fat bloat up around me.

But, damn, the Southern fried breast was nicely seasoned and went so well with the syrup-covered waffle. I probably didn’t have to order that side of gravy since the food was savory enough as it was. Fortunately, my brother found that potato salad tasted extra yummy when dipped in gravy so it didn’t go to waste.

From the time we sat down to the time we finished up our meals, it was only 30 minutes, helped by the quick service and Ziggy-Piggy speed of us diners. What can I say? It’s Roscoe’s, and I will never deny it again.