When I first heard about country line dancing at Oil Can Harry’s, a gay club in Studio City, I knew I had to go for the following reasons: 1) Even though I’m not a fan of country music (hate it), square dancing was one of my favorite classes during high school physical education, and 2) line dancing with a bar full of gay cowboys sounded like a hoot.

So me and a posse of straight cowgirls (yee haw!) converged on the bar on a Tuesday night, arriving early at 7:30 for dance lessons from 7:45 to 9ish. “Wild Country Nights” on Tuesdays, Thursdays and Fridays offer free dance lessons.

gay rodeo week, those specials were null and void. Rackin frackin! Instead I paid $9.25 for a Foster and MGD Light.

Surprisingly there was also a $3 cover but you get a bandana and a raffle ticket for your trouble. Door prizes included cowboy hats.

Expect lots of straw hats and cowboy shirts tucked into Levis. Everyone foot-stomps to some modern country new Dolly, Shania and a little Billy Ray too…. The crowd is friendly, but remember, these boys and gals (who are in greatest abundance Thursday nights) take their line dancing seriously…

When you go, make sure to bring a partner. Or you can take your chances with the bar crowd. I was partnerless so they paired me up with a stranger. Fortunately, I didn’t get stuck with the scary tattooed lady with the mullet but rather a cute gay boy named Colin who was encouraging and kind even though I stepped on his toes with my big, fat heels every now and again. 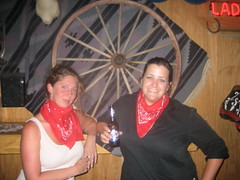 Our first lesson was the two-step. An easy little number that just involved “sloow-sloow-quick-quick-sloow-sloow” and repeat. After we got those steps down, the dance instructor added in some turns and then a spin. It was so much fun. I couldn’t stop laughing and felt really giddy about learning a new dance step. Before I knew it, I was doing the two-step to Shania Twain.

But then when they tried to teach country line dancing and everyone packed onto the dance floor to get in on the lesson, I bailed. The instructor went too fast for me, advancing and adding more steps until I was just a mess running and crashing into my fellow dance students. I thought it best for the safety of all those involved if I left the dance floor. The scary tattooed lady with the mullet yelled at me to get back on the floor but I just shook my head and pointed at my two left feet.

Once I gave up on dancing, the night suddenly got boring. Oil Can Harry’s isn’t really all that much fun for a straight unless you’re on the dance floor. That’s where all the action is; where people are line dancing to Madonna and Cher. Awesome. Otherwise, you’re standing on the sidelines sipping your beer and staring at a room full of people you’re not remotely attracted to.

I don’t know if I’d do it again. Tuesday night was supposed to be the not-too-busy night, but even then the dance floor was packed. It might have just been because it is rodeo week, like I said. At least I got the two-step down. Next up: salsa dancing!