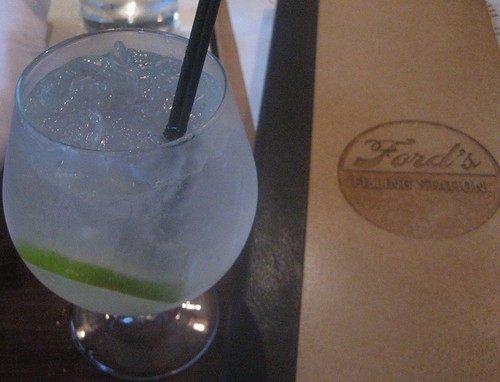 As many know by now, Ford’s Filling Station is owned by Harrison Ford’s son and former owner of Chadwick, Ben Ford. The Culver City restaurant, and L.A.’s first “gastropub” opened earlier this year to much fanfare, and because of that I decided to beg off until things died down a bit.

But when I went there last night to get some dinner before a movie at Pacific Culver, the hostess informed my friend and I that since we didn’t have a reservation the wait for a table would be 45 minutes — even though there were plenty of empty tables on the patio. But she did kindly offer immediate seating at the bar, which was more than fine by me.

The easy-on-the-eyes bartender introduced himself as soon as we sat down and handed us weighty menus with only two pages of cheeses, charcuterie plates and dinner items. The wine list itself isn’t extensive but there is a full bar. This is truly a guy’s guy restaurant.

My friend and I read and reread the menus several times, put off by the prices of everything. But since it was pay day today (and I was starving) I decided to splurge and get the crispy flattened chicken which came with corn succotash and lemon-garlic confit ($19). My friend went with the fish and chips ($19).

And at first I ordered a glass of Cab but then I spyed the cocktails list sitting behind the bar and pushed to the side. “Why didn’t the bartender show us that?” I wondered. I immediately asked to see it and was impressed by the selection. Unfortunately since we didn’t come here to drink, I got the Caipirinha ($9) since I figured it wouldn’t interfere with my food as much as, say, the chocolate martini. This Brazilian drink was soo yummy with a nice kick to it, as if it were laced with tequila. 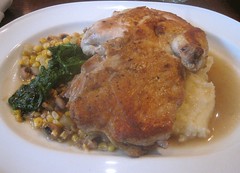 However, I was delighted then disappointed when the food arrived — it came faster than expected but in a small portion. Half a flattened chicken sat on a small stash of corn succotash with, apparently, two cooked spinach leaves and some mashed potatoes. Regardless, I dug in. The crispy chicken skin was flavorful and the chicken itself wasn’t too dry but after each bite I grew less and less impressed.

My friend picked through her basket of fish and chips, which, lightly breaded, looked more like tempura-ed fish and chips. And although she said she enjoyed it she wasn’t very excited by it. “Good bar food,” was her review. I think the prices of these dishes helped turn us off as it was definitely more than what they were worth. I’d pay at least half that but $19 for this meal at these portions is just crazy. But I guess that’s the norm for restaurants like this.

As we continued to quietly graze, I surveyed the bustling restaurant scene. It was decorated in the style of Metrosexual Man, reminding me of the West Elm catalog that sat on an ex-bf’s chocolate brown coffee table. Random pictures decorated the walls and a small library of books and a stack of board games sat in a corner of the restaurant.

The crowd—blue-collar guys stopping in for a beer, thirtysomethings headed to a movie at the new megaplex, younger hoodie-and-non-True-Religion-jeans guys with unfussy gals, elegant professional women catching up, and neighborhood looky-loos of all ages—coalesces in fine Culver City form, without anyone feeling inappropriately dressed.

The bar area had several tables with tall bar stools for would-be diners waiting to be seated or those just wanting a drink. Nearing 7:30, the restaurant/bar was in full swing with people everywhere — waiting for a table, ordering food to go, conversing over beer and plates of meat, clogging up the exits.

Although the food and prices aren’t all that great, it looks like Ford’s Filling Station has found an audience in burgeoning, artsy-fartsy Culver City. But I’d be more apt to return for the cocktail list than the menu. And I’d definitely recommend grabbing a drink here before or after a movie since the theater is just right across the street.