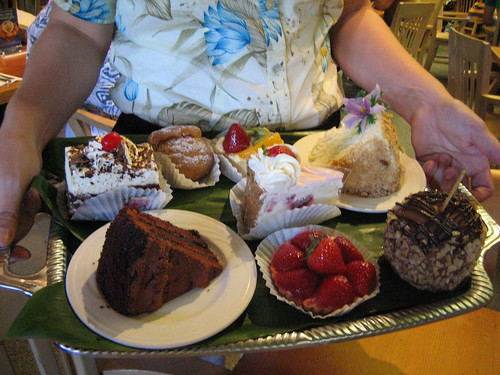 In search of the perfect birthday cake to go with my luau birthday party, I happened on King’s Hawaiian Bakery and Restaurant in Torrance. A really good review about it in Epinions sealed the deal.

King’s Hawaiian Bakery & Restaurant is very well known here in Southern California for their breads and pastries. Any bakery smells good but with an emphasis on exotic fruits, the colorful display at King’s Bakery is too much to bear.

A guava chiffon cake with whipped cream filling and topping and a guava glaze on top sounded perfect. However, when Dre took me to King’s this morning for a belated birthday Hawaiian-style breakfast and I was standing before the bakery, I was suddenly overwhelmed by all my options.

Which to get? The Mocha Haupia or the Peach Bavarian? After talking with the counterperson and the waitress, a self-proclaimed dessert expert who was nice enough to pose with their tray of goodies, I decided on their most popular cake, the Hawaiian Paradise — a three-layer (guava, passion, lime) chiffon cake with whipped cream filling and the three-fruit nectar glaze on top. For a half-sheet cake that serves 40 to 50 people and is decorated with plumerias (in any color you want), the total was $66.75. 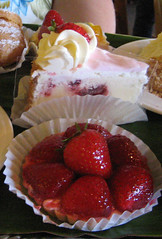 Yeah, I think that’s the most I’ve ever spent on ANY dessert, but hey, it’s a big birthday for me, why not treat myself and my guests?

I’d feel really weird about it had I not just enjoyed the most dee-licious breakfast there beforehand. If they could make French toast taste that good, imagine what they could do with cake?

I had the Big Island Breakfast ($7.25), their famous King’s Hawaiian French toast (so thick and yummy) with two eggs and Portugese sausage. The scrambled eggs had a light buttery taste and the sausage was savory. A cup of their Kona coffee ($1.75) was perfect, not too bitter or weak. But I wished that I had seen their juice list of guava, passion orange, and passion orange guava (small $1.75) first.

The busy restaurant had a nice airy atmosphere. It reminded me of Hawaii with its cool colors, colorfully dressed wait staff, and ample Hawaiian clientele. Unfortunately we were sat next to the big fishbowl cylinder that had a counter circling it where families with children enjoyed their meals a little too loudly. As Dre pointed out, it’s not a good place to sit when you have a hangover. If you are nursing last-night’s good time and are still dying for a big Hawaiian breakfast, I’d suggest sitting on the opposite end of the restaurant away from the fishbowl where there’s a room that’s almost sectioned off.

I really enjoyed King’s and think it would be the perfect place to take my parents for pupus the next time they visit. Apart from the fact that this is the only restaurant I know of that serves spam musubi (aka spam sushi), I think they’d appreciate the sweet and sour spareribs and huli huli chicken.

PS: Apparently there’s another King’s bakery location in Torrance off Western Avenue, but my friend Hawaiian Ryan advises against going there, saying that “it sucks.” So stick to the “real” restaurant on Sepulveda.