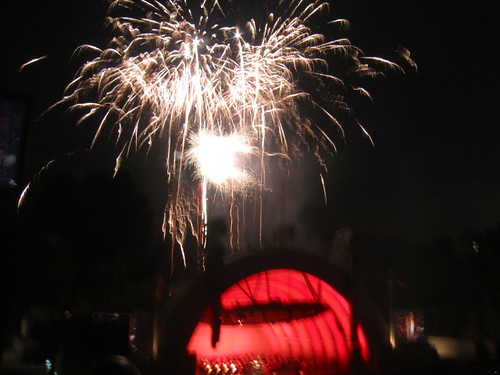 I loves me a good fireworks show and summer never seems complete without one. Sparkly lights igniting the sky with thunderous ka-booms? Fun! Unfortunately the big bang spectacle at the Hollywood Bowl featuring Kenny Loggins is all sold out, darn it all. And who wants to deal with the hordes of tourist families at Disneyland’s “Salute to America’s Golden Dreams” show?

Fortunately, Southern California has many other sparkly spectacles from which to choose. I like the following where you can go from the local and cheap to a day trip away. So, how will your 4th sizzle?

All day the park will be celebrating “America’s birthday” with live Dixieland music and its usual amusement park fun. Can you say “funnel cake”? You can spend all day dizzying yourself up with loads of rollercoaster rides and all night (well, about 20 minutes) tripping off the pyrotechnics. With rumors of closure, it may be your last chance to celebrate the 4th at Magic Mountain.

This one is nice because it’s free and the fireworks are doubled by their reflection off the water. Hopefully, there won’t be a marine layer hazing up the place the night of the 4th. If the sky is clear, stake out a spot in the park there or even have a picnic on the beach in Venice or Playa del rey and tune your radio to 88.9FM KXLU for a simultaneous musical accompaniment. Of course, parking and traffic around the beach at this time is such a bitch so if you live nearby it would be best to bike, skate or hike over there to enjoy the festivities stress-free.

Americafest at the Rose Bowl

Said to be the biggest and best fireworks show in Southern California, the Rose Bowl’s 80-year-old celebration offers a musical tribute to America performed by the Pasadena POPS Orchestra. The concert is open seating and gates open at 6pm so get there early for a good spot. Other things that make this party special are the all-day bbq fest that starts in the morning as well as the fact that you can picnic or have a tailgate party on the grassy area outside the Bowl. Admission for Bowl festivities is $10.

Sure, this one is a trek at over 70 miles away but I’ve always wanted to check it out since everyone who’s gone says it’s an awesome show. And the festivities start at noon on Cabrillo Boulevard with food, craft vendors and live bands. A separate Freedom Celebration takes place on West Beach where, for the $10 admission, you can enjoy drinks, dessert, entertainment and a prime spot for shiny lights action. The fireworks start at 9:15 at West Beach. If you’re one of the lucky 3,000 (out of the 80,000 people who normally swarm to the area) to get tickets for the paid-only concert on the beach, you get a musically synched score to go with your electrifying experience.