From the Road: The Sylvia Beach Hotel 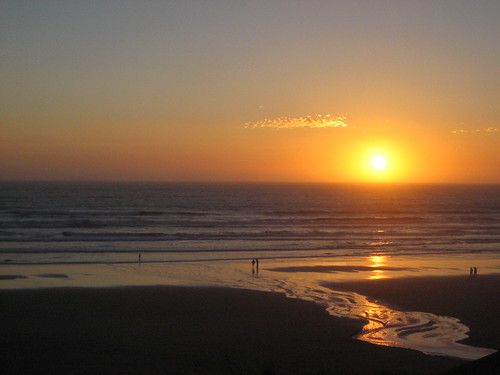 When my friend suggested the Sylvia Beach Hotel in Newport, Oregon (named after the founder of the famous Parisian bookstore, Shakespeare & Co.), I was skeptical. “It’s a hotel for book lovers,” she said with cheer. “Um, OK.” “Yeah, there are cats and books in every room and board games and a group dinner.” “OK, I know I have a birthday coming up but I’m not THAT much older.”

But with all my skepticism it was the best place we stayed on this whole trip, apart from the Sheraton in Vancouver of course. We’ve stayed in a real log cabin in the Cascades, a quaint B&B near Mt. Shasta, and an old town hotel in Arcata, California, but the Sylvia was the only one I really enjoyed.

Each room is named after a famous author. Our room was called “Oscar Wilde” and contained a twin with a discreet trundle bed and a shelf that had all of Wilde’s works including some bios about him and of even his lover, Bose. In the room’s desk drawer were a bunch of old journals with entries from former room occupants that dated back to 1990, each complimenting the hotel and their stay. Charming!

The night we got there we enjoyed a late night meal at the Blu Cork Wine Bar, partaking of the tapas. I had a lovely couple of glasses of Castle Rock Pinot Noir ($9).

The next day for some reason, I woke up at 5:30 so decided to go running along the beach located right at the foot of the hotel. Fog rolled in while I tried to make it all the way to the nearby lighthouse.

Afterward, I snuck upstairs to the third floor where coffee and tea are always served. It’s a library with a fireplace and a balcony. I enjoyed a Vanity Fair article on my new crush, Anderson Cooper, while slouching in a comfy armchair and sipping hot coffee.

Later I joined other hotel guests for a group breakfast in the dining room. There, I sat at a table and had a polite conversation with a nurse from a “frontier” town in Oregon and a couple of high school teachers from New York state.

At first I was skeptical about this aspect of the Sylvia. Talk to strangers while I eat? No thanks! But it really wasn’t that bad and it was interesting to hear how everyone ended up at this place. Traveling strangers really are fascinating people.

Anyway, I’d love to come back to the Sylvia. Of course, I don’t know when I’d ever make it out to Oregon again.