From the Road: 40 Ounces at Doolin's Irish Pub 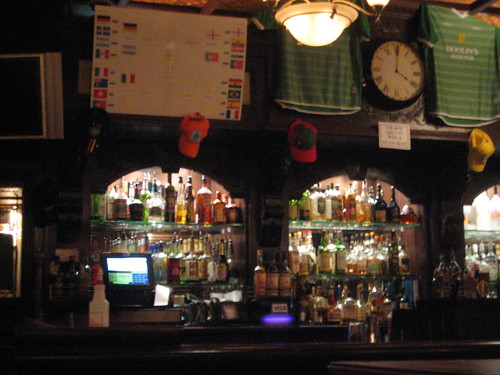 For our last night in Vancouver, we decided to hit Doolin’s Irish Pub. Within stumbling distance of our hotel, we thought it safe to down their 20-ounce pints so that’s what we did…a couple of them…and of course a shot of whiskey. Since they offer 16 “world-class” beers, it wasn’t hard to pick a good beer. My fave was Sleeman’s Honey Brown Ale — smooth, tasty and not too light. Domestic drafts are $6.25 and imports are $7.25 — pretty expensive but apparently they do the best pours in Vancouver with just the right amount of head and settle.

Regarded as the city’s most authentic Irish pub, Doolin’s reminded me of Finn McCool’s in Santa Monica with its dark wood interior, Irish memorabilia and kickback atmosphere.

The next best thing to an evening in Dublin’s Temple Bar District, Doolin’s does the Irish-pub thing as energetically as anyone in the city. Every night features live music, and weekends are for drinking enough Guinness to float the Titanic.

Every night there’s live music and last night was no exception. Our entertainer was one guy who reminded us of a cross between Bill Murray and that guy on Who’s Line Is It Anyway? but had a youngish voice that could emulate a pretty good Tom Petty and even Bono.

Dude was pretty good, just annoying in volume as his voice was amplified on speakers that seemed to go to 11. And there was no escaping his singing in the pub as the sound system did a thorough job of transmitting him EVERYWHERE. So we just yelled at each other across the table trying to have a conversation.

Thankfully after awhile he stopped and we were finally able to enjoy our beer in moderate peace. But that was shortlived since 2am came on faster than expected and we had to down our beers and shots as the lights came up. Just as well since stumbling back to the hotel blind drunk through the sketchy downtown streets might have been a bad idea.

But I enjoyed this pub and would definitely come back. Fortunately, if I ever get a hankering for a good pint of Irish beer, I won’t have to miss Doolin’s since Santa Monica has plenty of its own good Irish pubs to sate that thirst.