Raging Rio Party at The Day After

Last night, Dre invited me to accompany her to Olympian Carl Lewis’ bday party at The Day After in Hollywood. The first I heard of this party was on MySpace when they sent out a notice saying they were looking for dancers to stand on pedestals and gyrate for the masses. I thought nothing of going (as an attendee, not a dancer) since I don’t really know who Carl Lewis is AND I felt weird about going to a 40-something stranger’s bday party.

But after getting more email invites from Hardball Productions as well as BJCEvents in addition to Dre’s invite, I got brainwashed into going, even though it was a Brazilian theme night. So I threw on all the shiny clothes that I had and headed over.

We got there just in time for the hour of open bar and passed appetizers. There wasn’t much of a crowd yet and the only real Brazilian dressed people were the Carmen Miranda-costumed ladies passing out samples of a Brazilian soft drink.

Straying from my usual Jameson all in the name of being festive, I downed a rum and Coke and then moved on to a glass of champagne. After that I was emboldened to tap on the shoulder of some guy whom Dre had met at Busby’s one night but who had never MySpaced her back.

The slob only glanced at his shoulder and went back to ordering his drink. Only after he got his order did he turn to me and say, “Did you see someone tap me on the shoulder and run away?” I wanted to say, “Remember her?” but only ended up gesturing at Dre who was turned away from us. So he just walked away. The rest of the night I could tell he thought he was hot shit. What-evuh!

The party was dead for awhile with an older crowd of 40-somethings and the big dance floor closed off. So Dre and I kept wandering back and forth from the lounge to the patio, not finding a suitable place to stand. We marveled at the fact that there was no eye candy whatsoever!

Later in the evening, they finally opened up the other room to everyone else so we had at 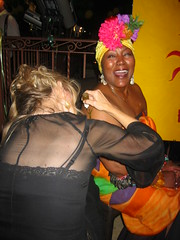 the dance floor. And I only saw two gyrating dancers on the pedestals. I guess they didn’t get enough applicants for the position. After working up a good sweat, we retired to the patio again.

There we chatted up the henna tattoo artist who had been drawing tats on the attendees since the start of the party. But now that things were quiet, he had nothing to do. So we let him draw on us. He free-handed an elaborate flower on Dre, a henna tat virgin, while I got this really cool dragon on my forearm — a tat I’ve always wanted to get but never had the guts to.

At around midnight, a train of Brazilian-costumed dancers with headdresses and bikinis made its way into the crowd, followed by musicians playing that shoulder-shimmying Carnivale music. The show moved into the club but we stayed put since we were in the middle of getting drawn on.

After that we called it a night. The party was fun in an uneventful sort of way but definitely not as fun as last time.

PS: Happy birthday, Carl, wherever you are.