Los Angeles Pride 2006 at The Abbey 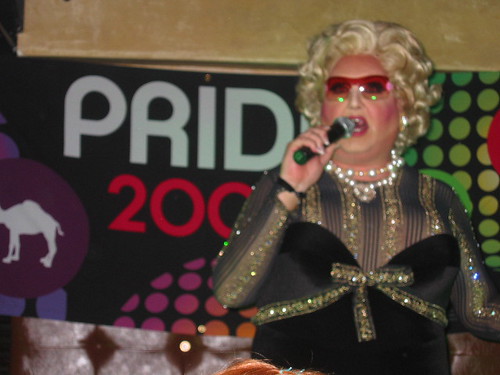 Every year I go out to WeHo to celebrate Pride with my brother, his boyfriend and all their friends. But these boys really don’t do anything different from what they usually do every weekend, which is to say drink at the Abbey, maybe hit Trunks and then end the night at Mickey’s.

This time, however, my nightlife clock was thrown off when I met up with them early on at Mickey’s. Apparently they had started their pride celebration early at noon. By six they were already settled in at Mickey’s.

Fortunately Gerard was up for backtracking to the Abbey, while his boys stayed put. I love the Abbey for the eye candy (read: the hot straight bartenders) and the dancing. Tonight was no exception as they cleared off more tables and chairs to expand the dance floors and the dj was spinning a mix of popular gay anthems like “Dancing Queen.” 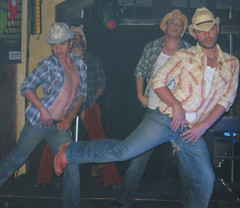 Gerard and I took a break from boogieing, however, to check out the Pride cabaret that was going on in the far corner of the main room. There, they put on a Brokeback ballet to the tunes of that Brokeback Mountain theme song followed up by a Chemical Brothers song and NIN’s “Closer.”

Things got pretty raunchy as the dancers acted out provocative sex positions. The women in the audience reacted the loudest to each simulated sex scene with squeals and cheering. When the performance ended, a woman in a sequin dress came on stage and handed an “Oscar” statue to one of the dancers as the audience whooped and applauded.

Later, there was a wedding cabaret with three couples of gay, lesbian and transgender dressed up as brides and grooms and dancing to “Best of My Love.” This one kinda made me sad despite the gay performance. Just listening to the words “Want the whole wide world to see…” and knowing that gay marriage is having so much trouble gaining acceptance in mainstream America.

Afterward, on a rumor that Prince William was cruising The Abbey, Gerard and I went out looking for him. Turned out “Prince William” was just a really good lookalike, but G was/is convinced it is him. However, this tall, good-looking blonde seemed too muscular to be the real Billy Windsor, plus he didn’t have palace guards around him. Gerard proposed that he was just having a gay Roman Holiday. Hmm, could be. We wanted to take a picture with/of him but he wouldn’t stay in one place as he kept making the rounds.

So with no photographic evidence of William but a whole lot of mojito in our tummies, we stumbled back to the boys who had since moved the party to Trunks.