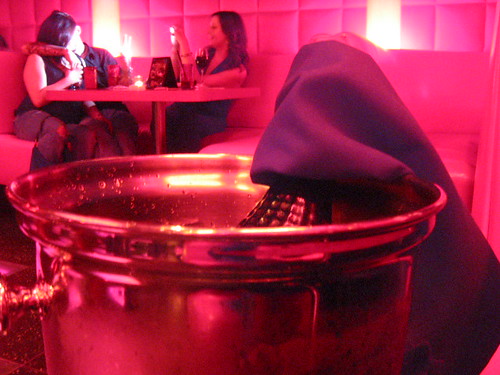 Ansel: “Come out to Chapter 8 tonight. It’s Agoura Hills’ hot spot. LA.com’s having a party there for our Fooditude newsletter. There’s going to be wine tastings with eight vendors and passed appetizers. It’s going to be fun.”

Me: “Where the hell is Agoura Hills?”

Ansel started giving freeway directions to get there and as soon as he said, “Take the 101 North…” I zoned out. But then curiosity got the better of me. That and my friend Dre said that she would drive. 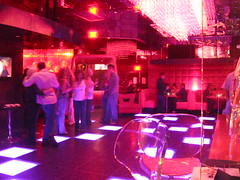 Ansel greeted us at the door with shiny wristbands and CozmoDecks and then directed us to the outdoor patio where the wine vendors were set up. Immediately Dre and I chatted up one of the wine guys. Dustin, very cute and friendly, talked us through a Shiraz, Merlot, Sauvignon Blanc, Claret and some very nice aged Scotch. Suffice it to say, even though it was a tasting, we got heavy pours and didn’t throw any of it away. Trouble!

Dustin told us that even though they weren’t selling any of the wines we were sampling that night, on Sundays at Chapter 8 you can buy bottles of wine (20 selections) for 50% off. With dinner of course.

Other special events here are the requisite happy hour from 5 to 7 where you can get $4 beer and martinis as well as food specials ($5-$10) and the popular dance nights on Thursdays through Saturdays.

Dre’s guy friend Tim, a regular here, got us a table in the fuck-me-red-colored lounge by requesting a $400 bottle of champagne that came in a grenade-looking bottle encased in a gold-colored sheath — which I had to take home for novelty’s sake. The staff were so nice and attentive to us, coming back often to make sure our glasses were always full.

At that point I had already too much to drink on an empty stomach so was only able to enjoy half a glass. I wish I could have tried their specialty cocktails which range in price from $8 to $20. With names like Sexual Chocolate and Double Ds, they sounded too fun to pass up, and yet I had to. 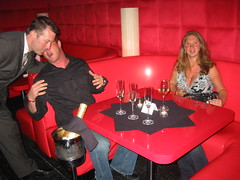 From our table we could see the red dining room across the way. Tim said that the food here is expensive for something not all that great. But when he said it was $40 for a prix fixe menu, that didn’t seem unreasonable to me. Plus if this is the only hot spot in Agoura Hills, I wouldn’t mind paying that much and just settling in for the night.

The lounge area had a dj stand overlooking the dance floor, where on the hot club nights there are gogo dancers up on the pedestals around the dj. Out front on the outdoor patio couples were getting cozy in the cabanas and around the firepit.

On weekends, the whole place becomes a late-night dance club, complete with DJs and long lines to get in the door.

Apparently the gorgeous attendees for the LA.com party aren’t Chapter 8’s usual crowd. I don’t know what that means but it was weird to tell the waitress that we were from L.A. when she asked. It’s THAT far away from the city. OK, 30 miles, but still!

I’d love to go here again and see what those danceclub nights are like, but it’s just too far to get my drink on. I mean WAY far. As it was, I was thankful for the designated driver otherwise I’d be SOL in the middle of nowhere.