The other night at Saints & Sinners’ 1980s prom I had a secret dream realized and it was a secret even to me. I was crowned S&S High’s Class of 1986 prom queen.

I, of course, would like to thank all of you who voted for me (the joke here being that king and queen were actually picked randomly from a box containing the raffle tickets of prom attendees). I was shocked when they called out my name. And before they got through mispronouncing my last name I was already skipping to the stage with a “No WAY!” But damn was it the funnest night ever! In fact so much so that any real details may be lacking from this post due to how fuzzy things got for me…as they tend to do every time I spend a night at S&S.

My prom king was none other than the Polaroid-wielding photographer who was responsible for taking “prom portraits” of all the party people. And we were crowned before a wonderfully costumed crowd who only knew us as “The Photographer and the Girl in the Blue Dress” but they were happy for us nonetheless. Afterwards, we did our victory slow dance and then a victory lap around the room. People came up to me and said, “I voted for you!” and “I sit behind you in chemistry class.” It was hilarious. 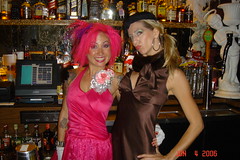 But credit really falls on the S&S crew for pulling it off. Sure, there were the minor glitches of how the balloons kept popping for no apparent reason and scaring people and how the thermostat couldn’t keep the room cooler than 80 degrees. But the dj was awesome as he spun tunes that actually made the guests gasp with surprise and joy. The bartenders, being the fun girls that they are, kept the energy up and the liquor flowing. And I loved how iconic ’80s movies, Pretty in Pink and Valley Girl, were projected onto the back wall of the main room.

The bouncers, with strict instructions to deny entrance to those who deigned to show up in regular dress, had the very important task of preserving the party theme. And the “Class of 1986” looked to have fun showing its school, or rather ’80s, spirit with skinny ties, leg warmers, lace and piles of bracelets and pearl necklaces — didn’t see any piano ties though.

This was my first prom ever where I had my first slow dance (to Madonna’s “Crazy for You” thanks to Arnie) and got to show off my first prom dress. And winning the plastic crown and scepter definitely made it a night to remember.