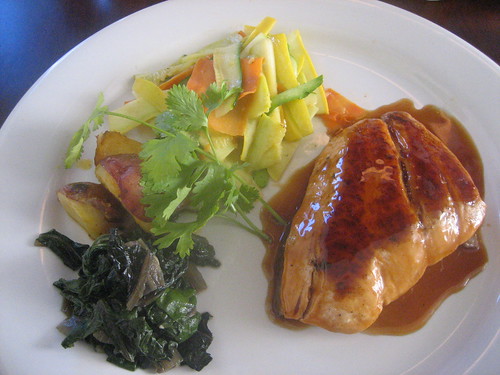 Recently I happened upon online reviews for the eatery spawn of Giant Robot store and Giant Robot 2 called gr/eats, which opened back in April 2005. If you only judge it from its site you’d think someone just threw a bunch of spare tables and chairs into a rec room and called it a restaurant. But if Asian-American pop culture magazine Giant Robot has anything to do with it, you should know that there’s something more stylish to it.

A friend and I ventured over to Little Tokyo West for lunch yesterday. The restaurant’s storefront itself was easy to miss since it was recessed off the street. My friend who was meeting me there even got lost, while I knew that it would be near one of the Giant Robot stores.

Once inside I was relieved to see that there were only a couple of those cafeteria-style tables taken up. I guess all the hype from its opening last year died down. Regardless, for some reason I chose a corner table squished between two other tables. Music was piped in from the speakers integrated into the ceiling and wood block paintings decorated the walls.

A tall, lanky guy looking very scruffy Silverlake-y shuffled up to me with the cutest kimono-print apron around his waist and a sheet of paper in his hands — the menu. Perusing its offerings, I had a hard time deciding what to get. As you would assume in a place like this, there are spring rolls and tofu burgers but then they also offer fried chicken, penne marinara and El Salvadorean paella. Huh? Sure, it’s an eclectic menu but in a fascinating, non-random way.

Finally I settled on the salmon teriyaki ($9) — salmon steak flavored with teriyaki sauce and served with seasoned rice and “vegetable ribbons,” which are cooked squash sliced thinly longway. My friend ordered the curry shrimp on our server’s recommendation ($8.75, shrimp and vegetables in green Japanese curry sauce on seasoned rice). And curious about the okra rolls ($5 — chicken, okra, and enoki mushroom wrapped in a lightly fried roll) we got an order of that.

And let me just say, it was allll so tasty! The okra rolls covered in salsa just melted in my mouth, as well as burned it a bit due to its high core temperature. But I didn’t care. The pain of a burned tongue didn’t stop me from going in for more. I especially loved my salmon teriyaki. The sauce wasn’t too sweet and it was so savory that I mopped it up with my rice. The vegetables were lightly buttered and complemented the dish’s flavors wonderfully.

I looked over at my friend to see if she liked her meal and found her sitting there staring at her just-emptyed plate. Hm, we ate too fast. Were we that hungry or is the food that good? I’ve no problem going back another time to figure it out.

The quick and attentive servers made it a stress-free dining experience, especially during a lunch hour. But I’d like to see what the scene is during their dinner time, maybe after catching a movie at the Nuart, as well as find out what that almond jello dessert ($2.75) is all about.