All About the Girls: LA.com's Party at The Day After 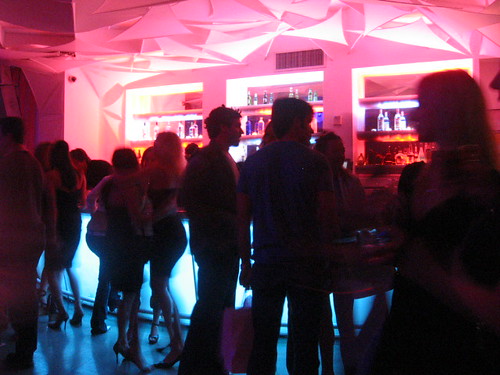 Last night at The Day After in Hollywood, LA.com/Hardball Productions threw a benefit and silent auction/Web site launch party. Yeah, it had so many things going on, my girlfriends and I didn’t know what to expect or even how we were supposed to dress for this thing. Get dolled up for the silent auction benefitting the Susan G. Komen Breast Cancer Foundation? Dress girly for the GirlsGuideTo.com launch party? Or risk attention-getting clubwear for this Hollywood scene?

With visions of pink martinis and fabulous gift bags dancing before our eyes, we just threw on whatever and hoped for the best. Purposely showing up apres the pink carpet arrivals — which apparently was only models on a pink carpet and the one photographer capturing the moment — we found our way into the club. The room just off the entrance was set up for the silent auction where you could bid on jewelry, wine, a Burke Williams spa treatment, Ed Hardy wear and even a VIP tour of Desperate Housewives.

The club itself seemed to be set up/reserved for bottle service patrons with three different castes of bottle service: the dark lounge area by the entrance where everyone could walk through; the white couches and chairs just off the dance floor in the main club; and the white couches and chairs along the wall which was cordoned off and guarded by a bouncer in black. Whichever the case, it looked like you couldn’t go wrong since each room had its own bar.

Naturally, we made our way to the one bar with the most bartenders who were sorta cute. They were pouring shots for a bunch of girls and toasting with them. And after we placed our drink orders, they did the same with us, pouring us a shot of something sweet and pink. It wasn’t anything strong but it was the thought that counts. For the three cocktails we ordered our total was $33. Yeah, yikes. But that’s Hollywood.

By 10ish, Shari Short, who apparently was christened the Next Big Thing by an MTV VP, performed on stage. I couldn’t really hear her music above the din of the club though, just that it sounded a bit too mellow for this scene. 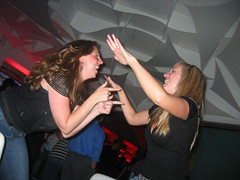 After she finished up, the dj started his set playing a bunch of songs from back in the day. “This music is horrible for this place!” my friend Amy complained. Although I liked the songs, she was right. Sure, like DJ Splyce at the Shag party, he played ’80s music, but his mixing skills weren’t on the same I-can’t-stop-dancing level.

We made the best of it though and just had fun goofing off on the dance floor with these Italian uomini. The crowd of beautiful girls and boys kept us visually entertained while daring clubwear kept us very entertained. ::snicker, snicker:: For an event that seemed to be all about girls, there sure were a lot of cute guys there!

By evening’s end, they ran out of gift bags, the pink martinis turned out to be a myth and what started off as a girlfriend pact to get out of there before midnight turned into a last-call exit. But what a blast.