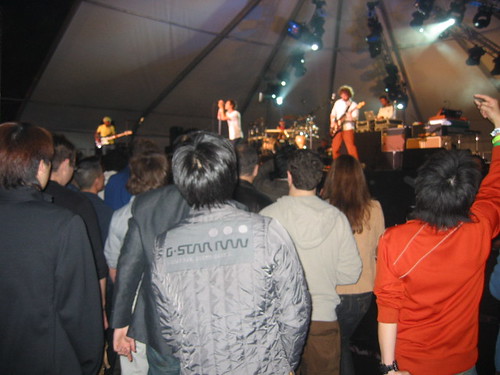 Last night was Sony’s E3 party at Dodger Stadium. Before this week, I didn’t know such a thing existed but apparently it’s the big to-do during the E3 convention with a live show by a Top 10 artist. Rumor had it that 50 Cent played here before he hit it really big, Coldplay did another year and the Pussycat Dolls were last year.

The identity of the band is kept on the QT until they hit the stage during the event itself. Since I was late to the party Incubus was already up there. Of course, since I’m not an Incubus fan the momentousness was lost on me but the energy from the fans was still contagious.

Incubus played a two-hour concert to a group of screaming fans up front as well as some indifferent older people in the back. Two guys tried to start a mosh pit but with only the two of them and a bunch of lookie-loos it was kinda sad.

Meanwhile I walked around the party which was set up on the hill overlooking Dodger Stadium. Tents were put up to house dance floors, bars and buffet tables. Food consisted of baseball park-themed fare like giant pretzels, mini hot dogs, White Castle mini sliders and caramel popcorn, as well as Mexican and Chinese food. I felt like a kid in a candy store, walking from table to table just eating a bit of everything. Naturally there were numerous open bars sprinkled around the event keeping the partyers thoroughly sauced. How the gamers love their drink. 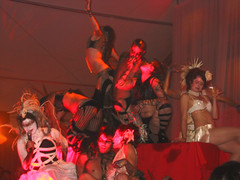 With a dj in the center of the action, acrobatic dancers and colored lights, it felt like a big ol’ rave.

The surreal moment for this night was when a bunch of writhing dancers mounted the stage atop one of the bars. I didn’t get what they were doing as they were dressed in various stages of undress in lingerie and bits of fabric while writhing around and posing for the masses. A scary-looking opera singer provided the eerie soundtrack. At one point a couple of dancers even simulated an orgasm while everyone just looked on. Weirrrd. Suddenly I wondered if I was in the second circle of hell.

Twas a night of mad debauchery and it was gooood. If you’re looking to make it to next year’s shindig, good luck. Apparently this is one of the hardest parties to get into since you’d have to know the VP of one of the invited companies and wristbands are strongly enforced at the gates. When you leave the party, they cut off your wristband in exchange for your goodie bag. This year it was a OGIO carry-on bag with wheels. Very nice.

Strange, wonderful luck got me into the party this time, hopefully it’ll work again next year.