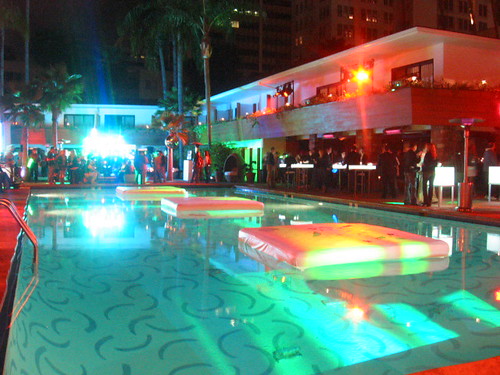 One of my first posts was about the Tropicana Bar. I had heard about it when Amanda Scheer Demme was still in charge of things. And now, even after her very public ousting, it hasn’t lost any luster.

Last night, it was the setting for Xbox’s E3 party; and the place was swarming with gamers (of course) and also actors, agents, publicists, and their hangers-on (huh?). Xbox had rented all the poolside rooms for video game creators to display their wares– meaning that you could go into each room and play a different video game. It was awesome.

The Tropicana Bar itself was beautiful with the pool lights casting a cool blue glow on everything. The Hotel Roosevelt and palm trees presided over the nightclub scene. And there were ample couches and ottomans around firepits available, but nobody wanted to sit down. It was all about standing up to see and be seen.

With an open bar and passed appetizers as well as tables of cupcakes and tiramisu, I had 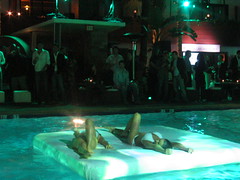 a really good time. At one point there was even a pool show where women dressed in white bikinis got into the pool and moved around on the white air mattresses on the water while everyone looked on at the spectacle, bewildered. Actually, I was bewildered, everyone else was mesmerized.

Danny Masterson of That ’70s Show was the dj, spinning everything from ’80s hits to Sesame Street. Twas OK. Nobody was dancing but there wasn’t anywhere to dance anyway.

The only other celebrity I recognized or really cared about was Michael Vartan, formerly of Alias (he’s so purty). Everyone else was from 7th Heaven or some other WB shows about high schoolers. Although, rumor had it that RUN DMC was making the rounds, too.

When I asked people how they got into the party, their answers ranged from “My friend is a Calvin Klein model so he got us in” to “I was just nice to the security guard.” The only people who seemed to come from the convention itself were the video game guys in the cabana rooms selling their games to these people who could only promise them endorsement to their celebrity friends and on their “shows.”

How did I get in? I was the hanger-on of a hanger-on.