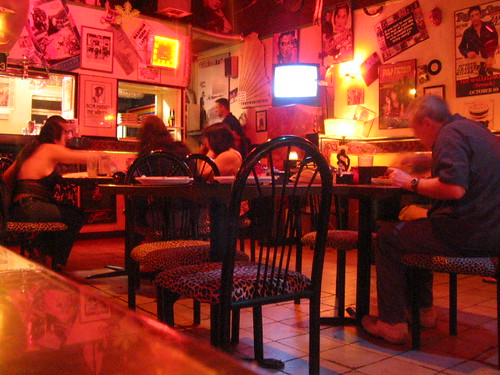 After drunk girl central, Andrea and I were craving some after-hours grub. Looking for something other than Swingers–which basically lost its luster about two years ago–and wanting something more substanstial than drive-thru, we opted for Toi on Wilshire.

Like its sister location, Toi on Sunset, this rock n’ roll Thai restaurant offers vegetarian Asian cuisine to sate the late-night munchies with a “healthier” alternative to Taco Smell or Jack in the Crack. Yeah, I know, eating a big meal right before bedtime is not the best idea but it sounded sooo good.

Getting there before 2am, Toi was fairly empty, only filled with small groups of clubbers who were groggy and drunk. Some of them were passed out with their heads resting on the tables.

Dre and I split an order of Pad Thai ($8.95), Yellow Chicken Curry ($8.95) and brown rice ($2.25). We soon discovered that mixing the rice and chicken curry together tasted like the best thing on earth. It wasn’t too spicy but spicy enough to keep it interesting.

The potato in the chicken curry was kinda tough, almost as if it was uncooked, but we just avoided that and slurped up the curry and coconut milk-soaked rice. Good stuff. After 10 minutes of mumbling between bites, the food was gone. Thai food at that ungodly hour really hit the spot.

If we really wanted to, we could have ordered some Chimay but at that point, I think we both had enough of drinking. It was a really good call though. Way better than Norm’s and fast food.