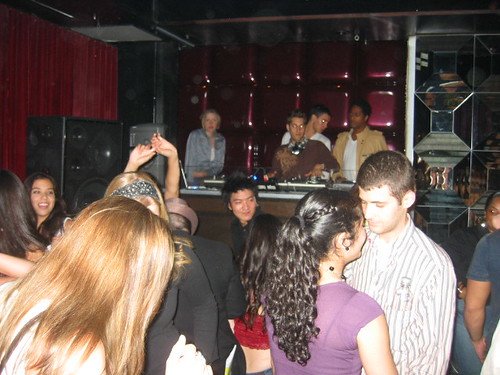 An hour late and a gazillion wardrobe changes later, my friends and I made it to Shag, formerly Concorde, for LA.com’s launch party for the club. “Go to the front velvet rope and say you’re on the LA.com/Avant Garde list” were the instructions on my RSVP. But nothing doing. There was already a long, slow-moving line of “LA.com/Avant Garde” people waiting there. When we finally made it to the door, since I hadn’t given my last name when I RSVP’d, simply “Caroline on Crack,” the door lady said I wasn’t on the list. “Are you under ‘Crack’?” she asked. I had to stifle a giggle. Nope, not under “Crack” either.

After paying $20 for valet, we were getting in so I resorted to, ugh, name-dropping and asked if Ansel, my LA.com contact, was around. Actually, he had said to call him if there were any problems. But as soon as I got him on the phone, the door people waved us in. Heh. And fortunately the entrance fee was $10. Although I hate paying to get in anywhere, clubs like this usually charge double that amount to get in.

At 11pm, the scene was still maneuverable so making our way to the bar was easy. My whiskey and Coke (no point asking for Jameson here cuz I didn’t want to have to pay an arm and a leg for it) was $9 and pretty weak. I was sad. But as soon as we moved onto the dance floor I was happy again. There was my new crush, DJ Splyce, secure in the dj booth but still enticing everyone to dance with his turntables. 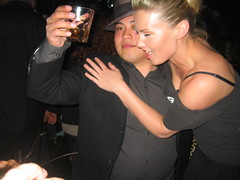 Nearby were a bunch of leopard-print booths for fancy bottle-service patrons. The two steps to ascend that area were viciously guarded by burly doormen in black who hassled you if you so much as thought of cutting through to avoid the crowded dance floor.

The club felt huge with a couple of large smoking patios, a lounge area, and two bars (I think), but the dance floor seemed small. Either that or there were just so many people on it. My friends and I ended up spending the better part of the night there. From Ray Charles/Kanye West to Nu Shooz to Bob Marley, DJ Splyce made sure there was something for everyone. Everytime we were about to leave, a really good song would come on so we had to stay 15 more minutes to dance.

Normally I stay away from hyped-up Hollywood hot spots. Mood? Cabana Club? LAX? Ferget it. I just have an aversion to velvet ropes, weak high-priced drinks, overblown egos, and paying to get in.

But with LA.com throwing the party, all of that became a nonissue. It was all about having a good time and that outweighed all the usual nightclub hassles. Clubwear was outnumbered by hip elegance with men wearing jaunty hats tilted to the side and women daring to show off shoulders more than their cleavage.

I probably won’t ever come back to Shag again since it’s not my scene but I’m really glad LA.com made it accessible and that I got a chance to check it out.