The Burlesque Show at El Cid: So Sexy It's Super

The first and third Thursday night of every month at 10pm (after the flamenco show) El Cid features its Super Burlesque Show with the Hollywood Pin-Up Girls. Andrea and I checked it out the other night and were pleasantly surprised.

The stage looked cramped, the sound system was blaringly loud, and the audience was pretty sedate for a Thursday night burlesque audience (maybe they were enthralled?), but I think a good time was still had by all. The dancers just looked like they were having so much fun up there that it was almost contagious. Now Andrea and I want to start taking burlesque dance classes.

I’ve never been to El Cid in Silverlake before so didn’t know what to expect. We had eaten beforehand but if we had known what an intriguing tapas menu was offered at this topless, I mean, tapas bar/restaurant we would have had dinner here instead. Prices ranged from $5.95 for sauteed mushrooms to $9.95 for spicy albacore crostinis. Past reviews have panned the food here but apparently, word has it that the situation has drastically improved.

Even the manager used to recommend that patrons eat elsewhere before stepping into this historic multi-leveled labyrinth for the show and the (excellent) sangria. But new chef Daniel Prillwitz has changed that.

Since we skipped the food, we felt obligated to order something since we were sitting in the middle of a restaurant, so we got a couple of glasses of their sangria blanco ($7 a glass). Very peachy, tasty and refreshing. It evoked fantasies of sitting on a white patio overlooking the Mediterranean.

But back to the show… It was almost like a cabaret, not like the Forty Deuce burlesque show where the girls are mostly featured dancing one at a time since that’s all that the tiny stage can really allow. 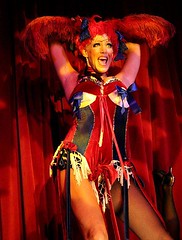 At El Cid, the girls lip synched, goofed off with their obligatory male dancer, and changed on stage (behind a big dressing screen). They did their high kicks and “Fosse, Fosse, Fosse” in the cramped confines of the raised stage. It really felt like we were sitting in an intimate 1920s cabaret nightclub. Music for the show ranged from Nina Simone’s “I Feel Good” to songs from Victor/Victoria.

The most anyone stripped down was when the one woman who reminded me of the love child of Tori Spelling and a drag queen did a feather fan dance and removed her bra, briefly moving the fan aside with a wink to show that she was wearing pasties. Everyone else pretty much kept their knickers on. And very sexy knickers they were. I love burlesque costumes!

This was such a good time that I’d totally throw a birthday party here. Just reserve a booth, order several plates of tapas and pitchers of sangria and enjoy the show.