Plummer's Furniture for Baptism By Boudoir 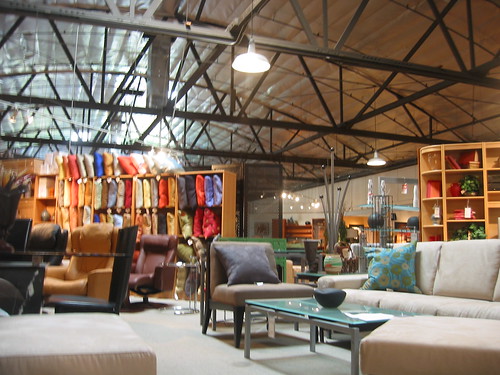 I’ve been wanting a new bed for awhile now, for the simple reason that even though I’m way into my adulthood I feel like I still sleep in a dorm room. My current bed is just the frame, box spring and mattress. Yes, at least it’s raised off the floor and not on cinderblocks. But I want the whole deal: a footboard, headboard, and, frankly, a mattress that can comfortably fit two. And maybe I’d even go so far as to buy bedskirts and lots of decorative pillows, too. And I could start calling my bedroom “the boudoir.”

Cost Plus and West Elm had offered many intriguing options for my future luxurious lounger, but the former sold out of the style I was considering, and my sister had pointed out that the latter received several bad reviews for its beds inability to survive, ahem, jumping up and down on them. 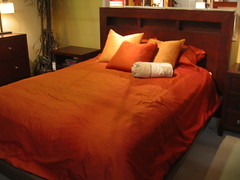 Dotsara mentioned that she was going sofa shopping at Plummer’s Furniture in Culver City so I tagged along just to see what was there. I’ve heard about it before from other Westsiders and its furniture was even bought for one of those home decorating TV shows on HGTV.

Still, I wasn’t really expecting much since every bed I’ve been attracted to has always amounted to thousands of dollars. But this time, having low expectations paid off when I came across two real prospects.

One was a dark cherry platform bed ($595) with a tall headboard that featured little cubbyholes where I imagined I’d store little decorations like unlit votive candles and rocks I picked up from the beach. The other was dark wood as well and looked like a leaner, lighter sleigh bed ($495). Both seemed crafted really well and pretty solid. And at less than $1,000, they were real bargains.

The salespeople in the store were nice and didn’t pressure us but rather let us explore and even stretch out on all the sofas to test ’em out.

When I start saving up for shelves instead of shoes, does that make me a grownup?