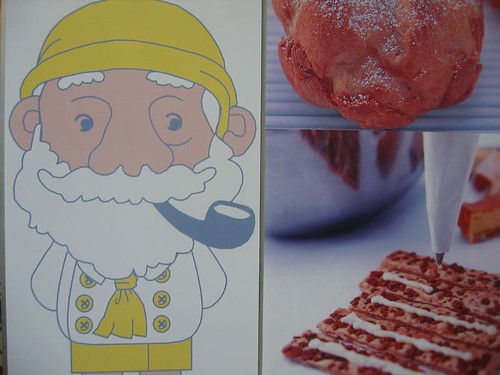 Mmmm ::salivating:: cream puffs. The first time I came across this in Hollywood & Highland, I walked right past it on my way out the mall, not realizing that I was in the presence of pastry greatness. Then I read somewhere about this awesome cream puff store that’s big in Japan and just opened up in Hollywood.

Beard Papa Sweets Cafe opened its first L.A. store (its second one is in Gardena) in one of my least favorite shopping centers, Hollywood & Highland, but what can one do? With the promise of special flavored cream puffs like green tea, chocolate and caramel, it needed checking out. And I’d brave hordes of tourists to do it.

Located on the mall stairs off Hollywood Boulevard, it’s hard to tell what goodies await in Beard Papa. I think the little Japanese character of the fisherman with the white beard and pipe threw me off. “Do they sell sushi there?” I wondered. As soon as I walked through the door and got a whiff of the sweet pastry aroma, I knew they didn’t sell fish.

Fortunately, as soon as we got up to the counter, a long line immediately formed behind us. Always happens! People were oohing and aahing just from the smell. Looking at the menu, it was hard to tell exactly what was being offered. They have regular cream puffs which just have the vanilla custard cream and then there are the chocolate-covered ones and then the special flavor of the day. I was hoping it was green tea, but today was caramel. My FAVORITE! 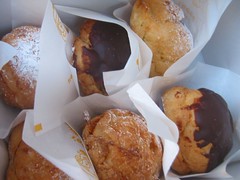 I immediately ordered six, not knowing why I ordered so many. It just sounded right. My total was $10 and they not only put it in a cute little carryout box but put that in a plastic shopping bag.

But that didn’t matter. As soon as I walked out the door, I tore into the box and bit into the chocolate-covered cream puff. The pastry was slightly crunchy in a fresh way and the cream was cold. You have to keep these refrigerated and even then Beard Papa suggests that you consume these within 24 hours since they don’t contain any preservatives. How quaint.

Anyway, Beard Papa will be an awesome place to visit during the warmer weather as they also offer a variety of boba drinks to go with your cool cream puffs.