Goldfrapp at the Wiltern 3/11 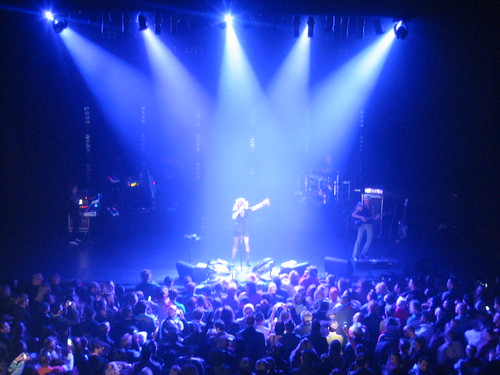 First off, the concert was awesome and it feels like I waited a long time to see Goldfrapp in concert even though I just started liking them last year when my personal music supervisor introduced them to me. Goldfrapp’s songs, I found, make me feel like playing dress-up, from a disco queen (“Beautiful“) to a German cabaret singer (“Ride the White Horse“) to even a burlesque dancer (“Crystalline Green“).

Suffice it to say, this concert-going experience was the worst one I’ve ever had. It started off from the moment we purchased the tickets. On a presale through Ticketmaster we were given the option of general admission floor, loge and mezzanine, all $25 seats. It wasn’t until several weeks before the concert that the Wiltern let us know that there was a grievous error, that in fact ALL the seats were meant to be general admission so we’d have to line up early if we wanted to get a good seat.

So the day of the concert, doors were scheduled to open at 8pm, we were standing outside the Wiltern in the freezing cold at 5. People even got into a fight around us because a couple had saved a spot for four of their friends and all those standing in line objected that if the late birds didn’t stand in line the whole time then they shouldn’t be allowed cutsies. Everyone was grouchy because it was so friggin’ cold. Must have been 40 degrees, 30 with the wind chill.

At 8:15 they finally let us in. The crowds trickled into the theater in a controlled fashion. On our way up to the loge area, we noticed that there wasn’t any concert memorabilia for sale in the lobby–not T-shirts, CDs, programs, nothing. Instead, theater staff passed out dime-size Goldfrapp buttons.

Standing in line for three hours paid off as we were able to secure loge seats front and center.

Fortunately there wasn’t an opening act to put up with, just KCRW/KROQ’s Jason Bentley spinning some tunes as everyone took advantage of the in-house bars. Finally at around 10pm, Goldfrapp took the stage, opening up with “Utopia” which reminded me of that movie Metropolis with Alison as the futuristic soprano in an art deco 1930s-perceived future and the Wiltern as the backdrop.

But despite the rough start, the concert was well worth the wait. From the colorful light show to the dancing surreal twins costumed in white rubber body suits, it was quite a spectacle. The best song was “Ooh La La” which had the whole theater jumping up and down in a frenzy. But Goldfrapp closed the evening with their last encore which included “Number 1” and “Strict Machine.”

I wanted them to keep performing but I guess with just three albums, their newest (Supernature) having just come out last week, they ran out of songs.

So even with no concert tee and only a worsening cold to show for the experience, I still love Goldfrapp and I’d gladly see them in concert again.