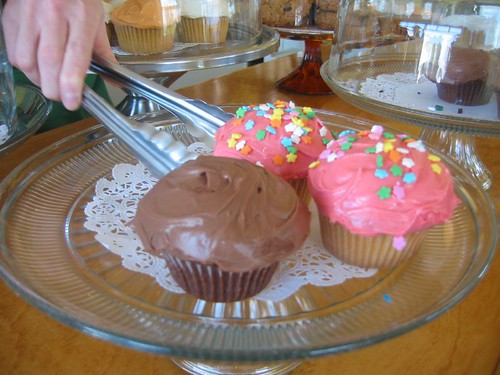 My friend Bernadette and I love to catch up over weekend brunch and one Saturday morning she suggested Bluebird Bakery in Culver City. She had read that they had a great bakery as well as many breakfast items. Excited, we drove all the way over there to discover to our dismay that cute little Bluebird was closed on the weekends. And to add insult to injury, they were only open til 3pm on weekdays meaning there was no way we’d ever be able to sample their fare as we work too far away to come back for lunch.

Fortunately, yesterday I woke up feeling like crap with the whole heavyness-in-the-head-and-soar-throat bit so I called in sick. Which I really hate doing because it’s really boring for me to have to sit home all day with no energy to do anything but sleep. BUT I remembered Bluebird’s weird hours so I took some Sudafed and dragged myself back over there with the promise that I’d get myself a cupcake or something. 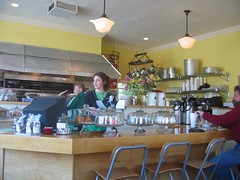 Arriving before lunchtime, the place was empty save for the buzzing workers behind the counter and the two men sitting at a corner table. Very small with just some chairs at the counter and about six tables, my aloneness felt pronounced as I stood awkwardly at the counter looking for some sort of menu listing the breakfast items. But then I realized I had to sit down first to order.

Once I did, the friendly waitress handed me the menu, nothing formal, just a green sheet of paper printed front to back with their food items. Many intriguing offerings like a Californian Panini with eggs, chorizo, ham, tomato and aged cheddar on country white bread ($7.75) and a spinach and gruyere cheese omelet with fruit and toast ($8.25). But I settled on their Croque Monsieur with proscuitto and gruyere topped with mornay sauce and a fried egg ($8.75) just to see if the waitress would laugh at my high-school French pronunciation of it (“krohk muh-syuh”). She didn’t.

My Croque Monsieur wasn’t anything substanstial with its garnish of tomato slices and cole slaw but where it lacked in presentation it made up for in taste. The creamy mornay sauce and fried egg atop made it more than just a grilled ham and cheese sandwich.

I enjoyed my quiet breakfast just staring out the large storefront windows as well as watching the bakers in the kitchen prepare their many orders for the day. Occasionally people walked in but to just order things to go. Once done, I decided to sample some of the bakery’s cupcakes ($2.40). This place is no Sprinkles with its simple offerings of chocolate, vanilla, coconut, pumpkin and carrot (no red velvet today!) but its messy frosting, bright colors, and multi-colored sprinkles reminded me of the cupcakes my mom used to make for my elementary school classes.

Plenty of neighborhood schoolkids covet these cupcakes, but they’re sophisticated enough for grownups: The lemon cupcake is made with real lemon juice and lemon rind.

The only bad thing about Bluebird, besides its hours, is its unfortunate location in Culver City past the closed car dealerships and situated literally on the wrong side of the railroad tracks. I could see it doing well in downtown Culver City, on Main Street next to the scrapbooking store or something. As it is, it feels like a well-hidden secret, only revealed to those lucky to happen upon its glowing online reviews or its location.

POST EDIT: After a visit to Bluebird this morning, Bernadette found out that, yes, they are going to start having weekend hours “soon.”