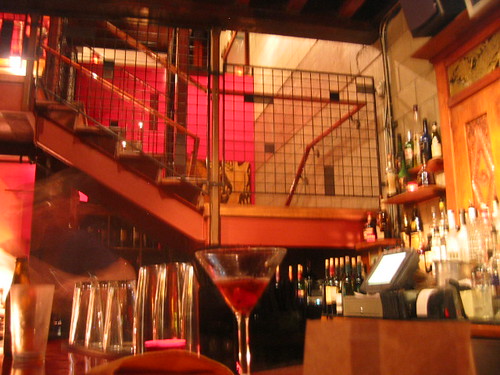 Bite, the sushi restaurant in Venice, used to be Zazen. That’s not really saying much as all they really did was change up the exterior and get a hotted-up Web site (although even the site still has “Zazen” labels). Otherwise, the menu and “martini” list are virtually the same.

Michael has been coming here for years and said the owners felt the place needed a makeover because CitySearch users unfairly panned them for bad service. Of course, when I’ve gone to Zazen before, I thought it was fine. The customer service was OK, sushi tasted all right and the cocktails, albeit pricey, were fun. But I don’t know about spending bucks to just change the exterior to throw angry customers off the scent of past “transgressions.”

As it was, sitting at the bar in Bite surveying the scene, everything looked the same, down to the restaurant crowd. This night, though, I opted out from ordering one of their many sweet specialty cocktails since today was Girl Scout Cookie day at work and I had enough sugar. Instead I got my usual Jameson on the rocks ($8) while Michael ordered a Maker’s Manhattan ($10).

For sushi we decided on the Samurai Roll (shrimp tempura and avocado roll topped with spicy crab, smelt eggs, crushed won tons and eel sauce) and the Spicy Tempura Roll (shrimp tempura, spicy tuna, avocado, kaiware sprouts, cucumber, sesame seeds, M-80 sauce). Both were pretty good but I really hated that they were $15 each. I can see paying that much at sushi hot spots but even then, Geisha House’s most expensive roll comes out to $14 and that’s Ashton Kutcher’s hyped restaurant in the heart of Hollywood AND their chef competed on Iron Chef!

But Bite? It’s a boite off Washington Boulevard, across the street from C&O and Hinano Cafe. You’ve got tourists, artists, and beach bums milling about outside fer chrisssakes! And if you’re going to bill something as “Asian street food” shouldn’t you charge “Asian street” prices?

I’ve got nothing against the customer service, Don the bartender is a darling, but damn if I pay $30 for drinks and a roll of sushi. Rather, I’d give their happy hour (5-7pm) a chance. With $3.50 for flash-fried calamari and $6 Spicy Shrimp Roll, that’s more my speed.