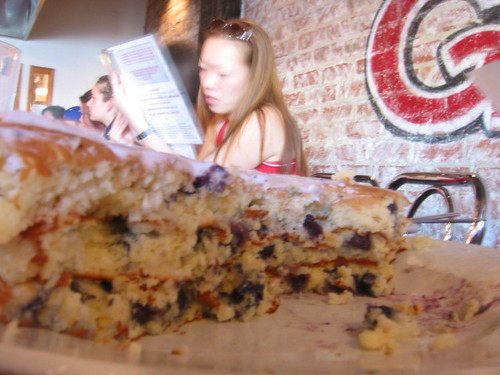 When you were a kid, did your mom get you to finish every last brussel sprout on your plate by saying something to the effect of, “There are children starving in Africa and you’re going to throw that away?” Well, if you were traumatized and as an adult still feel obligated to finish everything on your plate then don’t go to Griddle Cafe.

The portions are ridiculously HUGE and it doesn’t help that their menu is filled with a myriad of delectable items. Every time I go there for breakfast I want their eggy breakfast offerings, but then their yummy pancake selections beckon to me and I get all ambitious and think that I can have my pancake and eat it, too. But that’s never the case.

Portions are quite big at Griddle Cafe, so be ready to take your first bite starved and your last with a disclaimer that ”you’ll never do this to yourself again!”

Went there for brunch on this fine Sunday and only had to wait about 20 minutes on the sidewalk standing among posing Hollywood hipsters. The little bald guy who mans the list is pretty good about rotating everyone through. Today we were seated at the counter, which spaced everyone apart pretty well until two morons forced a friend in next to us.

After oohing and ahhing over the menu for five minutes, my friend and I decided to split a Chicago Charlie Scramble ($10.95–chicken chorizo, potatoes, bacon, green onions) and a Bluesberry Pancake ($9.95–blueberries in the pancake and topped with blueberry sour cream and powdered sugar). And I ordered a bottomless cup of their fine French press coffee ($2.95 a person) to wash it all down.

My friend Bernadette had never been here before so when the food arrived piled high on large plates, she gasped. We dove into the savory scramble but when we tried to tackle the mountain of flapjacks, we hit a wall. It tasted so good but we couldn’t do more than three bites each at this point. Not only were the cakes a foot-long in diameter but there were three of them to power through. 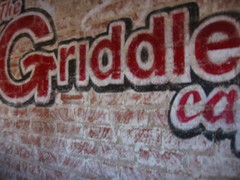 Alas, it didn’t happen and we left feeling extremely guilty for wasting what would have easily fed a small starving family of five. “That should be illegal…to make pancakes that huge,” Bernadette said gesturing at our three-fourths full plate of uneaten cakes as well as the plate next to us left behind by two guys. “Now if two guys have to share a plate, you KNOW the portions are too big.” Their plate had even more left on it. It looked like they only took a small pie slice out and left the rest of their caramel, pecan, whipped cream stack. Yes, I said two guys left that behind.

Did we box any of it to take home or give to homeless people? Nope, 1) We didn’t want to look at another pancake…at least for a month and 2) Oddly enough there were no homeless people nearby. One would think that they’d line up knowing how much uneaten food the Griddle Cafe probably has to dispose of every day. But then again, maybe they’re sick of the pancakes, too.